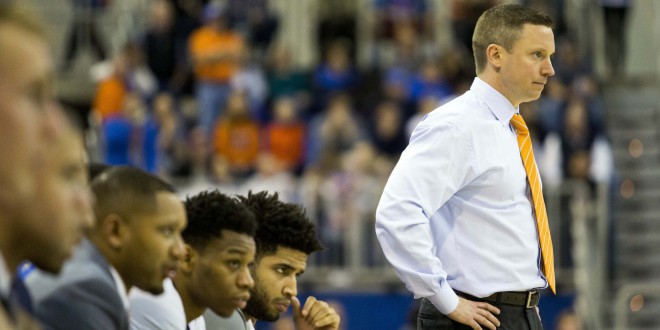 Bruce Pearl is no stranger to Florida Basketball. In his six seasons with the Tennessee Volunteers, he went 10-2 vs. the Gators, and 4-2 in the O’Connell Center. A coach once faced twice a year, is now seldom seen by Gator fans. But on Saturday night, Pearl will square off with Florida for only the second time as the head coach of the Auburn Tigers (9-8) since leaving Knoxville. Pearl departed from Tennessee following the 2010-2011 season, after receiving a three-year show-cause penalty from the NCAA for recruiting violations involving former high school standout and prized recruit, Aaron Craft.

Pearl’s tie has transformed from an unclassified Tennessee orange to a more burnt orange since coming to Auburn from Tennessee, and so has his role as head coach. In Knoxville, Pearl situated himself at a basketball powerhouse, with NCAA Tournament births expected, and top recruits lined up to play for the highly regarded head coach. At Auburn, Pearl has been tasked with rebuilding a program that hasn’t seen success since the days of Charles Barkley, and has only made the NCAA Tournament eight times in their 111 year history.

In Pearl’s first and only game against Florida since starting his tenure at Auburn, the Tigers lost by 20 to the Gators, coming up flat on both sides of the court. This season, in his second year at Auburn, Pearl’s team has looked far better than they did in last year’s matchup vs. Florida. The Tigers come into the game riding a two-game win streak, picking up victories over Alabama and #23 Kentucky at home. Florida Head Coach Mike White talked about Auburn’s recent success.

Auburn is led by junior guard Kareem Canty, who sat out last year after transferring from Marshall. Canty is averaging 19.4 points per game, while shooting the ball at an efficient percentage, making 42.1% of his shots from the floor, and 40.8% from downtown, good enough for 13th in the SEC. Canty is the team’s floor general as well, averaging a team leading 5.4 assists per game. In his last three games, Canty has scored 22.3 points per game, shooting 48.3%. Head Coach Mike White profiled Auburn’s prolific scorer,

While Florida has rebounded at an extremely high level this year, they’ll have to be weary of senior forwards Tyler Harris and Cinmeon Bowers on the boards. Harris is the better pure scorer, putting up 15.2 points per game and 8.2 rebounds per game, mostly working in the interior.  Bowers is the more crafty rebounder of the two, averaging right below a double-double at 11.5 points per game and 9.4 boards per game. In their last five contests, Bowers and Harris have combined for 146 total rebounds. Bowers has faced the Gators before, putting up 11 points and 11 rebounds in last season’s 75-55 loss, while Harris will be making his O’Dome debut after transferring from Providence College.

The Tigers rank in the middle of the SEC in scoring, averaging 76.5 points per game, placing 117th in the NCAA. On defense, Auburn isn’t quite as talented, giving up an average of 77.2 points per game, good for 293rd in the nation. The Tigers’ silver lining this season has been their success from beyond the arc, making 37.5% of their shots from downtown, ranking 4th in the conference.

Florida comes into this one riding a two-game win streak as well, dominating the state of Mississippi with consecutive wins against Ole Miss and Mississippi State. Dorian Finney-Smith achieved his fourth double-double of the season, and third in a row, putting up 20 points and 13 rebounds in the Gators’ most recent win against the Bulldogs. Finney-Smith joins Al Horford, David Lee, Chandler Parsons, Marreese Speights and Udonis Haslem as the only other Florida player to record three straight double-doubles over the past 20 seasons. KeVaughn Allen has also been red hot for the Gators as of late, scoring 27 and 19 points in Florida’s last two games. While the Gators have let up 70+ points in each of their last two victories, Florida has been stout on defense this year, allowing an average of 65.1 points per game, good for 41st in the nation.

INJURY UPDATE: Center Schuyler Rimmer is questionable for Saturday’s game with flu-like symptoms, while forward Alex Murphy is still out indefinitely with a foot injury. Coach Mike White gave an update on both players at Thursday’s media availability.

BROADCAST INFORMATION: Saturday’s game tips off at 8 P.M. at the O’Connell Center, and can be seen live on the SEC Network, with Dave Neal on play-by-play and former Missouri standout, Jon Sundvold, on color. You can listen to the game live on ESPN Gainesville 95.3 with full coverage starting at 7:25 p.m.