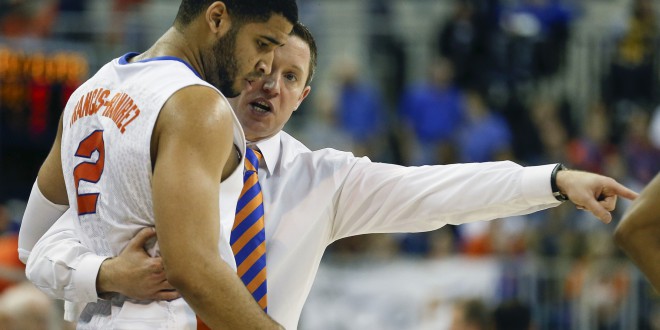 Gators Look To Sustain Their Momentum Vs. Arkansas

The Florida men’s basketball team (14-7) is coming off of their most important win of the season, after taking down the #9 West Virginia Mountaineers last Saturday. On Wednesday night, the Gators will face a surging Arkansas Razorbacks (11-10) team, whose won their last two games, including a victory over #5 Texas A&M at Bud Walton Arena.

Leading Arkansas’ scoring attack is junior guard Dusty Hannahs, who transferred to UA after one season with Texas Tech. Hannahs averages a team-leading 17 points per game on 46.8 percent shooting. Hannahs has also been deadly from downtown this season, making 45.5 percent of his shots from beyond the arc, good for second on the team. In his last four games, he’s been nothing less than stellar, averaging 21.5 points per game, including 25 points in the team’s most recent victory against Texas Tech, his second best scoring game on the season. Florida Head Coach Mike White talked about Arkansas’ success as of late.

The Razorbacks floor-master general is senior guard Jabril Durham, who averages a team-best seven assists per game. His assist-to-turnover ratio on the season is 7:2.1, with the senior dropping 17 dimes in the hogs’ last three games. Arkansas as a whole has moved the ball superbly this season, ranking 12th in the nation with 17.5 assists per game.

Junior forward Moses Kingsley was named last week’s SEC Player of the Week, and was instrumental in the Razorback’s takedown of the Texas A&M Aggies. Kingsley scored 18 points, adding 11 rebounds and three blocks in that one, while shooting the rock at a semi-efficient 46.2 percent. In Arkansas’ last three games, Kingsley has averaged a double-double, with 15.3 points and 10.7 rebounds per game in that span. After averaging around 11 minutes per game in his first two seasons, Kingsley has since seen a huge increase in playing time, averaging a team-leading 29.7 points per game. Arkansas Head Coach Mike Anderson discussed Kingsley’s contribution to the team this season.

The Gators have been red-hot this season at home, remaining undefeated on the year at the O’Connell Center. On top of a huge win over #9 West Virginia in the Big 12-SEC challenge, freshman KeVaughn Allen was named SEC Freshman of the Week, and honor that hasn’t been won by a Gator since Michael Frazier II did It during the 2012-2013 season.

Forward Dorian Finney-Smith has also been instrumental in Florida’s success as of late, scoring at least 20 points in three out of his last four games. Finney-Smith is averaging 14.8 points and 8.1 rebounds per game, leading the team in both categories.

As a unit, the Gators rank 14th in the nation in rebounding, averaging 41.6 rebounds per game, also good enough for second in the SEC, just behind the South Carolina Gamecocks. Florida’s staunch defense has been a major factor in their victories all season, allowing only 65 points per game, ranking 35th in the nation and second in the conference. Where Florida must improve is their overall scoring, a category they rank 153rd in the nation and 11th in the SEC with 74.4 points per game. The Gators abysmal free-throw shooting to start the season has also improved somewhat, as Florida shot 77 percent from the charity stripe in their most recent game vs. West Virginia.

INJURY INFORMATION: Forwards Kevarrius Hayes and Justin Leon are both questionable for Wednesday night’s game vs. Arkansas. Hayes suffered an arm injury vs. the Mountaineers, while Leon, who suffered a concussion vs. Vanderbilt, is in danger of missing his second straight game. Forward Alex Murphy is still out indefinitely with plantar fasciitis in his right foot. Arkansas has no injuries to report.

BROADCAST INFORMATION: Wednesday night’s game tips off at 7 P.M. and can be seen live on the SEC Network with Mike Morgan and Joe Dean Jr. on the call. The game can be heard live on ESPN Gainesville 95.3 FM, with coverage starting at 6:25 p.m.

Previous Next Up, the SEC Championships for Swimming and Diving
Next Cleveland Excited to Join Gators, McElwain Pumped for 2016 class