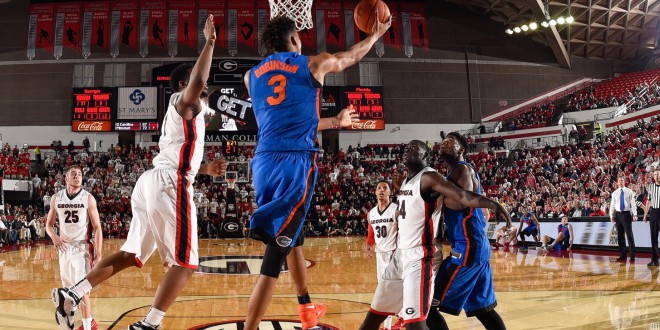 Grit will be the defining characteristic in Saturday afternoon’s matchup between the Florida Gators (17-9) and the South Carolina Gamecocks (21-5), as the two team’s square off at noon at Colonial Life Arena. The Gamecocks and Gators rank #1 and #2 respectively in rebounding in the SEC, with both teams falling in the top-20 nationally in boards per game. Florida has won seven straight vs. South Carolina, but this weekend’s matchup won’t favor the Gators. Florida head coach Mike White described the Gamecocks’ toughness.

The Gamecocks won their first 15 games to start the season under fourth year head coach Frank Martin before losing to Alabama. Since then, the Gamecocks have lost four of their last 10, including their last two contests vs. #22 Kentucky and SEC cellar-dweller Missouri. Despite their poor trend as of late, barring anything miraculous, the Gamecocks are still on track to receive a bid to the NCAA Tournament, while the Gators, in many people’s eyes, still have work to do.

South Carolina is led by the tenacious frontcourt-backcourt duo of junior guard Sindarius Thornwell and senior forward Michael Carrera. Carrera is the team’s interior stud, averaging a team-leading 14.6 points and 7.4 rebounds per game. His dauntless performance on the boards this season ranks him 11th in the SEC in boards per game, and has helped propel the Gamecocks to place eighth in the NCAA in offensive rebounds per game.

While Carrera’s work on the boards has been noteworthy this season, his three-point ability is what makes him so versatile. Carrera is shooting an unbelievable 46.6 percent from beyond the arc, good enough to rank 9th in nation in three-point shooting percentage. His range has allowed him to average 18.8 points and 7.5 rebounds per game in his last four contests. Coach White described Carrera as one of the most improved players in the SEC  and one of the keenest defenders in the league.

Junior Sindarius Thornwell had his best season at South Carolina as a freshman, and is looking to recapture the same magic that had him as a projected 1st-round pick in the 2014 NBA Draft. Thornwell is an interior thrasher who loves getting to the rim, using his 6’5″ frame to get over defenders, and throw down the occasional posterization. He’s averaging 12.8 points per game and a team-leading 3.7 assists per game. Thornwell will need to muster up the same high-level play he had midway through the SEC schedule that he has since lost in the Gamecocks’ last two contests. In that span, Thornwell has shot 23.8 percent, scoring only 16 points in those two games.

The Gators must also be weary of Thornwell’s backcourt companion, junior guard Duane Notice. Notice had his best game of the season in South Carolina’s loss to Missouri, posting a season-high 21 points on 57.1 percent shooting. Notice was also a stellar five for seven from beyond the arc in that contest.

Florida is coming off of a barnburner victory over the Georgia Bulldogs on Tuesday night, after losing their previous game to Alabama, in which they suffered their first SEC home loss of the season. In that game vs. Georgia, the Gators shot a poor 36.4 percent from the field and 20 percent from three-point range, but were able to hold the Bulldogs to 32.3 percent shooting from the field. Defense has been a key point of Florida’s philosophy this season and has kept them in games, allowing only 65.9 points per game, good for 47th in the nation. Coach White discussed his shooting philosophy, and what he’s done to try and get the team’s percentages up.

Dorian Finney-Smith struggled in that game vs. Georgia, going 1-10 from the floor, for only seven points, his second lowest total on the season. While “DoeDoe” had trouble getting his shots to fall, Coach White explained how his mentality and leadership helped guide the team to a victory, as KeVaughn Allen stepped up big time for the Gators, going 7-13 and posting a team-leading 19 points. Outside of Allen, neither team had a player that scored more than 12 points, with only five total players between both teams scoring in double digits.

Saturday’s matchup will give Florida head coach Mike White another chance to prove himself against a veteran coach in Frank Martin, and he is more than excited for the opportunity.

INJURY UPDATE: Florida forward Alex Murphy remains out indefinitely with plantar fasciitis; he has missed the team’s past 12 games. South Carolina guard John Ragin has missed the team’s past three games due to an undisclosed illness, and is questionable for Saturday’s contest. Ragin has not been too much of a contributing factor for the Gamecocks this season, averaging only two minutes per game.

BROADCAST INFORMATION: Saturday’s game tips off at noon and can be seen live on the SEC Network with Dave Neal and Jon Sundvold on the call. The game can be heard as always on ESPN Gainesville 95.3 FM with pre-game coverage starting at 11:25 a.m.

Previous The Great American Race Returns; NASCAR is Back
Next Gator Baseball Set To Open Up Season Against FGCU