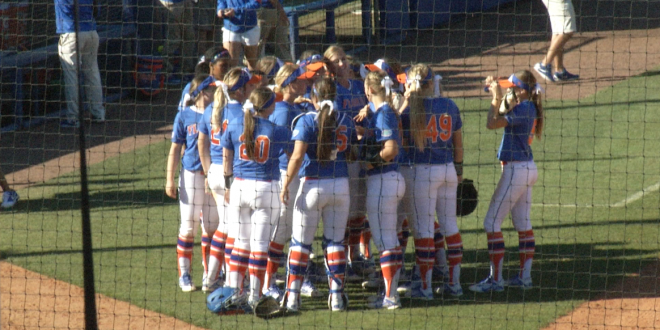 The Florida Gator softball team won the Aquafina Invitational on Sunday in Gainesville after defeating Illinois State and Florida A&M at Katie Seashole Pressly Softball Stadium. The pair of victories improves the team’s record to 22-0.

The Gators were down early against Illinois State after the Redbirds’ Annie Heineman scored a run in the first inning. But, Kayli Kvistad tied the game for the Gators with a home run in the second inning to make the score 1-1.

In the third inning, Taylore Fuller scored off a RBI from Kvistad, and Kirsti Merritt added to the total off an RBI from Aubree Munro to make the score 3-1. After a scoreless fourth inning, Merritt and Alex Voss added a pair of runs to extend the lead to 5-1.

Florida put the game firmly out of reach in the sixth inning that saw the Gators score six unanswered runs. Amanda Lorenz scored the first run of the inning off an error from ISU. Kvistad added a RBI to score Taylor Schwarz, and Munro drove in her second run of the day to score Merritt. With the score at 8-1, Kvistad scored her second run of the game to make it 9-1.  Justine McLean and Lily Mann finished the day with a pair of runs, and the Gators defeated Illinois State 11-1.

Following the victory, the Gators were right back on the field to face the Florida A&M Rattlers.

Much like the game against ISU, the Gators were down early against the Rattlers after Tashayla Irvis scored to give FAMU a 1-0 lead in the third. But, Florida would go on to score three runs of their own in the third from the likes of Kelsey Stewart, Nicole DeWitt and Kvistad to make the score 3-1.

After scoreless fourth and fifth innings, DeWitt scored her second run of the game in the sixth inning. The Gators would go on to defeat the Rattlers 4-1. Delanie Gourley pitched five and a third innings for the Gators while recording 13 strikeouts before freshman Kelly Barnhill took over for her in the circle. Barnhill played the remainder of the game while recording five strikeouts of her own. Together, Gourley and Barnhill recorded 18 strikeouts in the game, which is a single-game record for the Gators.

Following the game, Florida head coach Tim Walton says he was pleased with the performances of Gourley and Barnhill.

The Florida Gator softball team will be back in action on Wednesday for a doubleheader against South Dakota.