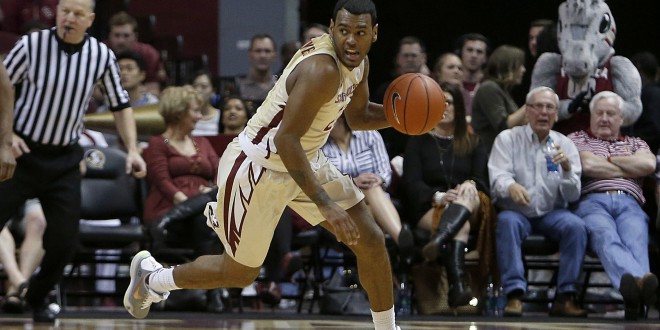 After going 19-13 this season, the Florida State men’s basketball team (8-10 conference play) were left out of the NCAA Tournament. That’s okay, though. The Seminoles still have a chance to prove themselves in the NIT tournament, which last night’s 84-74 win against the Davidson Wildcats  is allowing them to do.

While the 10 point final score difference may not show it, the Seminoles dominated throughout the majority of the game. The Wildcats were the team who put up the first points on the board, when forward Nathan Ekwu turned his offensive rebound into a quick layup. The Seminoles tried to respond with a missed three-pointer, a scoring opportunity which the Wildcats rebounded and turned into another lay up. Florida State responded with a layup of their own 15-seconds later.

By 12:47 into the first half the Seminoles had narrowed the score to 14-13, trailing by one point.  It was Florida State forward Jarquez Smith’s dunk that gave the Seminoles a 15-13 lead over the Davidson Wildcats.

The Seminoles never looked back.

The first half came to an end with the Seminoles leading 30-26. The second half began with Florida State adding to the scoreboard first, on guard Xavier Rathan-Mayes’s made free throw. For the next three minutes, the Seminoles struggled to put up more points. Davidson put up a three-pointer of their own to make the score 31-29.

Florida State picked up momentum then and extended their lead to 41-32, with 14:30 on the clock. The Wildcats responded with four back-to-back points and from there the two teams kept the score close, to the point where a three pointer by Davidson forward Peyton Aldridge cut the Seminole lead to 47-46.

The two teams continued to keep the score tight for the next three minutes. A Seminoles layup with 8:19 left in the final half gave Florida State a 58-50 lead. For the next eight minutes, the closest the Wildcats got to the Seminoles was six points. At a few points during the game, Florida State led Davidson by 16 points.

Davidson guard Jack Gibbs’s three-pointer with :27 left was the last time either team scored. Gibbs scored a team high 17 points for the Wildcats; for the Seminoles, it was freshman guard Dwayne Bacon who was the high scorer with 23 points.

Bacon says for this win the Seminoles focused on getting their points from inside the paint.

The Seminoles entered the National Invitational Tournament as the number three seed. Only one seed above them were their in-state rivals, the Florida Gators. The Gators played last night against the North Florida Ospreys, a game that they dominated and left with a 97-68 win. Two of the Gators SEC rivals played as well last night, with the South Carolina Gamecocks joining the Gators in the NIT Tournament’s Round of 16 after a 88-66 win against the High Point Panthers. Alabama was not as lucky as its conference rivals, losing to the Creighton Bluejays 72-54.

The Seminoles advance to the Round of 16 to play Valparaiso Thursday night at 7 pm.

Previous Florida Gulf Coast Sweeps Farleigh Dickinson 96-65 in ‘First Four’
Next Florida Takes Down UNF in 97-68 Rout, Advance to Second Round of NIT