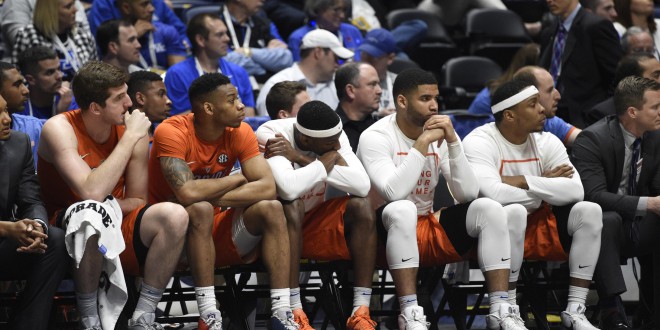 Up one point with 3:42 left in the quarterfinals of the NIT, the Gators could taste the fresh mozzarella cheese of Ray’s Pizza in New York City on their tongues. Unfortunately for Florida, George Washington would close the game on a 12-6 run, winning the contest 82-77, and advancing to the Final Four of the NIT at Madison Square Garden in New York, New York. Florida finished the season with a 21-15 record

Dorian Finney-Smith, in his last game as a Gator, finished with nine points and eight rebounds, just short of his season average of 14.9 points and 8.3 rebounds per game. KeVaughn Allen led Florida in scoring with 22 points on 8-15 shooting. Kevarrius Hayes finished with 13 points and six rebounds. Hayes in his last two games shot 11-12 from the floor.

Tyler Cavanaugh was an absolute stud for the Colonials, leading the team with 23 points on 4-5 shooting from beyond the arc. Kevin Larsen, the Danish native, finished with a double-double on 19 points and 13 rebounds, his 11th of the season.

GW out-rebounded UF as a whole, 39-35, and had a three rebound advantage on the offensive glass. The Colonials outshot the Gators, 47.7 percent-43.8 percent from the floor, and 33.3 percent-29.2 percent from downtown.

#Gators season comes to a close tonight but proud of these 3! #GatorsAlways pic.twitter.com/hqMtU45fiq

A fast-paced game ensued after the tipoff with the two teams tied up at 17 after the first ten minutes. George Washington, who finished the year as the second best three-point shooting team in the Atlantic 10 conference, just couldn’t connect from downtown, starting the game a mere 2-8 from beyond the arc.

With five minutes left in the first half, the two teams remained neck and neck at 27 points apiece. The rock was certainly moving as each team had six different players score up to that point.

A Joe McDonald layup right before the buzzer gave George Washington a 39-36 lead going into halftime. The Colonials out-rebounded the Gators in the first half, 19-17, and outshot UF, 51.6 percent-42.9 percent.

Patricio Garino was stellar for GW in the first twenty minutes, scoring 11 points on 5-6 shooting from the field, adding three rebounds as well. KeVaughn Allen led the Gators in first half scoring with nine points. Dorian Finney-Smith also added eight points and four rebounds in the first frame.

George Washington took their biggest lead of the game at 55-47 with 13:17 remaining after a Kevin Larsen jump shot. Larsen was the main catalyst of the Colonials’ offense throughout the contest.

An 8-0 run would quickly follow as Florida tied the game up at 55 with 11:08 left in the contest after a Kevarrius Hayes alley-oop. Hayes finished the game with 14 points on 6-7 shooting.

With five minutes left in the game, the Gators strong free throw shooting, going 10-10 up to that point, pulled them within one point of the Colonials. Florida simply wouldn’t go away late, no matter what GW threw at them.

Previous Florida Football: Offense in Competition Mode
Next The Spurs Turn Up the Heat Over Miami, 112-88