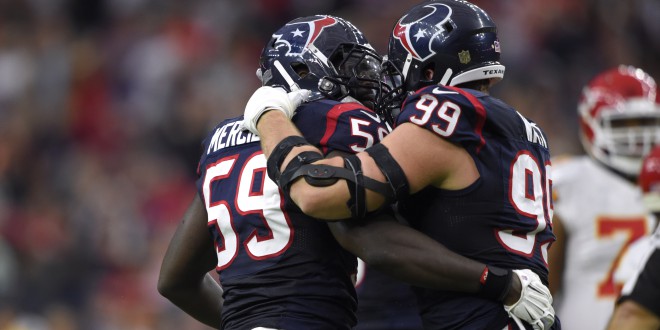 Houston, We Have Expectations!

A trip to the wild card round of the playoffs would be considered a success for most NFL teams. Especially if that team used four different starting quarterbacks on the way.

But with a defense led by reigning defensive player of the year J.J. Watt, and the off-season signings of quarterback Brock Osweiler and running back Lamar Miller to boost the offense, the Houston Texans are looking to solidify their place as an AFC contender this upcoming season.

With Osweiler coming over from the Broncos on a four year, $72 million contract, the Texans hope they have their franchise quarterback after consecutive seasons of inconsistent play at the position.

Last year, the Texans had Brian Hoyer, Ryan Mallet, T.J. Yates, and Brandon Weeden each start a game, with Hoyer starting the most (nine games), but any consistency and momentum he’d built at the position was hampered by two concussions and ankle injury he suffered in latter half of the season. After an underwhelming performance in the AFC Wild Card round against Kansas City, it became evident that the Texans could be looking for a new quarterback to lead the franchise.

The Texans have pieces on the offense around Osweiler to make it a dangerous unit this upcoming season.

Star wide receiver DeAndre Hopkins and last year’s first round pick, wide receiver Jaelen Strong, are set to lead the aerial attack. Head coach Bill O’Brien says that Hopkins will benefit from having a consistent quarterback with whom he can work with on a day-to-day basis.

Meanwhile the addition of Lamar Miller brings a speedy back both with running and pass catching abilities to the Houston backfield to replace former Pro Bowl running back Arian Foster, who was released by the team earlier this month. Coming off of a season in which he set a career high in receiving yards and a tied a career high in rushing touchdowns, Miller provides Osweiler and O’Brien a dynamic option who can be used in many ways. O’Brien says he likes Miller what Miller can bring in the run game and is excited about the ways they can use him in the pass game. He also said that Miller is a great teammate and locker room guy.

On the defensive side of the ball, the Texans return a strong defense, a staple of the team since drafting J.J. Watt.

Watt leads a strong front seven that also includes linebacker Brian Cushing, Whitney Mercilus at defensive end, and Jadaveon Clowney, who started to play up to his potential towards the end of last season. Starting corners Kareem Jackson and Johnathan Joseph return to lead a secondary that ranked third against the pass last season. Even though the Texans return a strong defense, the team is looking to make it even stingier through the draft. O’Brien says the team is looking to provide some help to veterans on the defense by getting some young guys through the draft.

With the potential on offense, and the talent on defense, the pieces are there for the Texans to build off last season. If Osweiler can play up to his contract, and the rookies can help the defense play up to its elite level, the Texans could be in position to win the division for a second straight year in route to a deep run in the AFC playoffs.

Native New Englander. Follow me on Twitter: @jonacosta_10
@jonacosta_10
Previous Two New Rules for NFL in 2016
Next Bob Stoops Preparing for Next Season