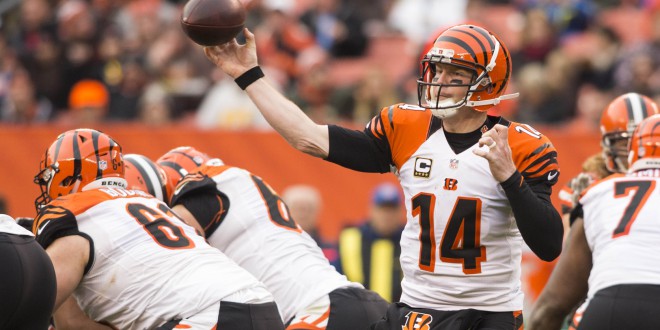 The Cincinnati Bengals finished their season on a heartbreaking note, a Wild Card loss to the Pittsburg Steelers.  The Bengals essentially handed the Steelers a victory in the final two minutes of the AFC Showdown.  The downfall began with Jeremy Hill’s fumble and ended with two personal fouls on the same play by Vontaze Burficit and Adam “Pacman” Jones.

The season was marked with lots of high points, including a comeback win over the Seattle Seahawks, to lift the Bengals to a 5-0 start, marking them as a title contender.  However, the Bengals’ season was also marked by low valleys.  In Week 14, Dalton fractured his thumb, leaving the final three games of the regular season and postseason to backup quarterback, A.J. McCarron.

Overall, McCarron did not disappoint.  He came into play without throwing a single pass in his NFL career.

Though the season didn’t end as they planned, Dalton and his go to receiver A.J. Green will be back in action on Sundays this fall.  This dynamic duo has been the most successful combination in the past decade for the Bengals.

However, the depth at wide receiver took a hit in the offseason.  Marvin Jones and Mohamed Sanu will not return to Cincinnati.  Jones was in talks with the team for a competitive offer in free agency to stay at the number two spot as a wide receiver.  However, earlier this week, Jones decided he wanted to play at the number one spot with the Detroit Lions, as they will try to fill the gap that Calvin Johnson left.

The Bengals don’t plan to make any moves at the quarterback position.  Although Cincinnati could trade McCarron, Head coach Marvin Lewis says this was never a thought or option, because the coaching staff is proud of how McCarron has developed.

In free agency, the Bengals maintained a strong defense.  The Bengals resigned a few significant players during the first week, simply solidifying an already-good defense. A case could be made that Adam Jones’ re-signing was the most notable resigned, because it keeps a valued veteran in the secondary for another three years.

The other major signing was safety George Iloka.  He is young and ready to make his mark as the team’s go to safety.  Although he is a top performance player that could sign with many teams, he will stay in stripes for another five years helping to prevent big plays.

Looking ahead to the NFL Draft, the Bengals have a need for depth at the wide receiver slot.  A.J. Green is the “go-to” guy, but he will need others to back him up. Although the defense is solid, Cincinatti may also look to create depth at the outside linebacker and defensive line positions, as their veterans age.

In 2016, The Bengals are looking ahead into the future.  They’re hungry to get over the Playoff hump and ready to win a title.