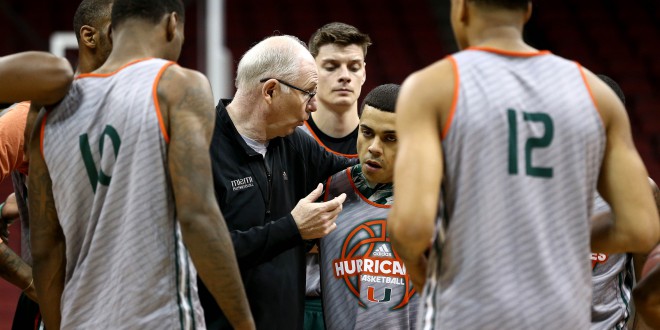 Miami Hurricanes head coach Jim Larranaga talks to guard Angel Rodriguez (13) during practice the day before the semifinals of the South regional of the NCAA Tournament at KFC YUM!.

Today marks the start of the NCAA’s Sweet Sixteen and the South Region semifinal kicks off in Louisville between Villanova (31-5) and Miami (27-7).

The Wildcats entered the tournament seeded No. 1 last year, this year they sit at No. 2 while Miami is right behind as the No. 3 seed. On top of that Miami is the four point underdog in tonight’s match up.

Miami has lost three of four to Villanova and they have not played each other since 2004. However, the Hurricanes are a much older team with more experience and size. Veteran Miami seniors Sheldon McClellan and Angel Rodriguez average a combined 29 points and six assists per game.

One thing both teams have in common is struggling to make it deep into March. Miami has not reached the Elite Eight in the program’s history, and Villanova has made it to the Final Four once.

If Miami wishes to advance, the Rodriguez-McClellan duo will need another explosive performance like the one they had against the Shockers last Saturday when they combined for 46 points, five assists, and five steals.

For Villanova to advance Daniel Ochefu will have to defend the paint against Miami and be in charge on the boards.

Tonight’s winner will go on to face either Kansas or Maryland on Saturday for a spot in the Final Four.