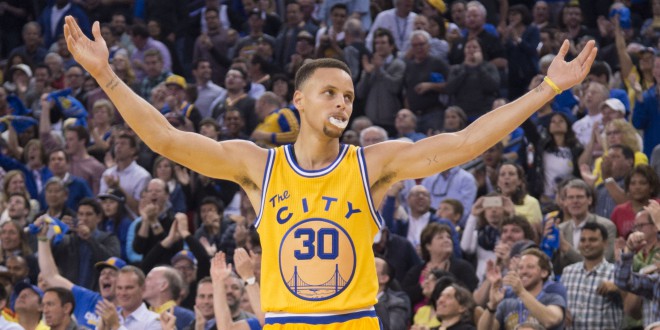 The Golden State Warriors (67-7) are on a roll and are one win closer to history following a 102-94 win over the Washington Wizards (36-38) on Tuesday at Oracle Arena.

Golden State extended its home run to 54 wins and stay a game ahead of the 1995-96 Chicago Bulls’ pace, who currently hold the record, 72-10. With Tuesday night’s game, the Warriors matched their win total of last season and can afford two losses in their final eight games to crown themselves the new record holders.

Warriors guard Stephen Curry says it’s important for the team to chase their goals without letting the pressure get to them.

Golden State led in the first quarter, but fell behind in the second quarter following the quality start. Washington overcame an early eight-point deficit, building a 46-37 lead of its own, and put pressure on the Warriors all night. Golden State managed to close the half with a three-point lead and set the tone for the rest of the match up.

The Warriors took control during the second half of the contest and built up a 95-76 lead. The Wizards charged and were able to close the gap in the closing minutes.

Curry locked in six more 3-pointers to increase his record total to 26 points. Klay Thompson followed with 16 points for the Warriors and Draymond Green added 15 more with 16 rebounds and nine assists to just miss back-to-back triple-doubles.

Golden State head coach Steve Kerr says the team continues to put in hard work and earning a win is not as easy as it seems.

The Wizards were led by guard Bradley Beal who had 17 points, Markieff Morris added 15, and Otto Porter Jr. scored 11. Washington’s star point guard John Wall  had his streak snapped of nine straight double-doubles. He was limited to eight points and 11 assists.

The Warriors play again Wednesday against the Utah Jazz (37-37) in one of the tougher games left in their quest for 73 wins.

Previous Panthers Lose at Home to Maple Leafs, 5-2
Next Day of Joy and Disappointment for US Soccer