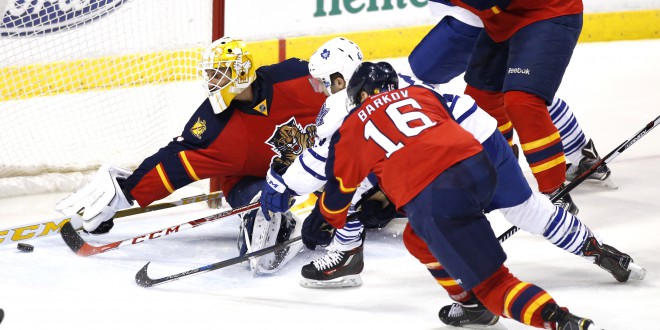 Tied at the top of the Atlantic Division with fellow Florida team the Tampa Bay Lightning (44-27-9), the Florida Panthers (42-25-9) have a lot they could lose.

The Maple Leafs scored early on in the first period with 15:11 left on a 2-on-1 play.  Michael Grabner scored the first goal for the team when he and Connor Brown drove the puck down the ice against Panthers Aaron Ekblad. After after a quick pass from Brown who flicked the puck back to Grabner, Grabner snapped the puck into the goal for the point. Grabner’s shot was the only goal of the first period.

Brown recorded for another two assists in the second period after two power play goals by Nazem Kadri. It was only after these two goals and with the clock down to 6:23 in the second period did the Florida Panthers score. Jonathan Huberdeau hit the puck in to get the Panthers on the board, 3-1. Huberdeau’s goal was the last goal made that period.

It was Toronto who once again scored first in the first three minutes of the final period when Kadri shot from 99 feet to the right of the goal, giving the Maple Leafs a 4-1 lead over the Panthers. Greg McKegg scored the last goal for Florida with 11:26 left in the third period where he knocked in a shot from close-up. McKegg’s shot marked his first ever career goal.

In the end, it was Toronto who had the final say after P.A. Parenteau scored on a power play with 6:34 left in the final period, making the final score of the game 5-2.

Panthers head coach Gerard Gallant said he felt his team played well in some areas and were lacking in others.

The game wasn’t the only thing the Florida Panther’s lost last night. Vincent Trocheck left the game in the second period with foot pain after blocking a shot with his foot. Trocheck, who is tied with Jaromir Jagr as leading Panthers this season with 25 goals, did not return for the rest of the game.

The Panthers only have a day to pick themselves up after this devastating loss. Florida plays again on Thursday night, when they welcome the New Jersey Devils (37-32-38). The game is set to start at 7:30 p.m.