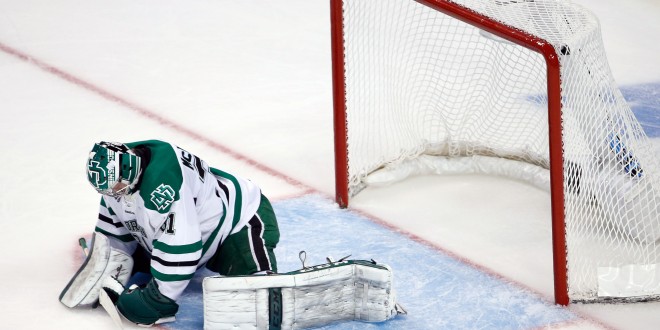 While the closest thing to a Division I southeastern ice hockey school may be Alabama-Huntsville, the semifinals and championship game takes place in Tampa, FL this year. So buckle up and start doing a little research, because the Frozen Four can be as exciting as it gets for hockey fans. It’s Boston College taking on Quinnipiac and Denver against North Dakota at the Amalie Arena Thursday night.

The fact that a different champion has won each of the past five years shows the evenness of the playing field, however there are some familiar faces in the Frozen Four this year. 2012 was the last time it was in Tampa, and Boston College secured their fifth National Championship. Both North Dakota and Denver were in that 2012 field, but both were defeated in the regionals.

This postseason has seen its own share of “March Madness” as No. 2 overall seed St. Cloud State and No. 4 overall seed Providence were both upset in the first round. If you are not familiar with this tournament, 16 teams start and the final four head on to Tampa.

Thursday at 5 p.m. we will see the first-ever NCAA Tournament meeting between Boston College and Quinnipiac. BC will be making their NCAA-leading 25th Frozen Four appearance and will attempt to secure their sixth championship, as the No. 1 overall seed Quinnipiac is seeking the program’s first ever national title.

The Boston College Eagles (28-7-5) won the Northeast Regional, defeating Harvard and Minnesota-Duluth, as their goaltender Thatcher Demko was named the region’s Most Outstanding Player, with 60 saves and three goals allowed in two games. Demko is one of three nominees for the Hobey Baker award, given to the top college hockey player. Last year’s winner was Jack Eichel, who was drafted second overall and currently plays for the Buffalo Sabres.

The top-ranked Quinnipiac Bobcats (31-3-7) are in their second Frozen Four after wins over RIT and UMass-Lowell, as they take a five-game win streak into the Frozen Four. Like BC, Quinnipiac’s netminder was the teams’ MOP in the regional, saving 41 of 42 shots, as the Bobcats outscored their opponents 8-1.

Fitzgerald pairs up with Ian McCoshen, Florida Panthers’ second round pick in 2013, to make up one of the Frozen Four’s best and most mobile defensive duos.

This primetime matchup (8:30 p.m.) has a lot of headlines. A rematch of the 2005 National Championship game, between two schools who hold 14 national championships (both tied for second with seven).

The University of Denver (25-9-6) will be making their 14th Frozen Four appearance and first since 2005. The Pioneers defeated last year’s runner-up Boston University in the first round, and 2012’s runner-up Ferris State in the second to win the West Regional.

The University of North Dakota (32-6-4) will be making their third consecutive and 22nd overall Frozen Four appearance, although looking for their first national title since 2000. The Fighting Hawks won the Midwest Regional, defeating Northeastern and Michigan respectively.

ESPN Gainesville will be live at the Amalie Arena covering these games, TV coverage for both at 5 p.m. and 8:30 p.m. semifinals are on ESPN2. The championship game is Saturday night at 8 p.m. on ESPN2.