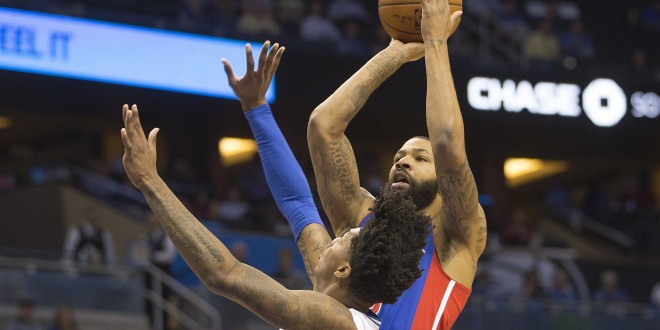 Nearing the end of the regular season, Orlando was in a must win mode Wednesday night as they took on the Detroit Pistons, ultimately falling 108-104. The Pistons win put Detroit just one win away from clenching one of the last two spots in the Eastern Conference playoff race.

Orlando played with intensity all night but were out scored late in the fourth by Detroit and Orlando couldn’t regain their lead. Piston’s guard Reggie Jackson scored 12 of his 24 points in the fourth quarter alone. Jackson’s Teammates  Tobias Harris and Kentavious Caldwell-Pope helped keep the Pistons lead, scoring key shots late in the fourth quarter. Magic Head Coach Scott Skiles feels his team fell apart in the last three minutes.

The Magic are now 33-45 with just four games left in the season. Orlando forward Aaron Gordon knows his teammates have talent but the Pistons defense played with more grit. The Magic had averaged over 119 points per game in their previous five games, but they were held far under that Wednesday night.

Up next, Orlando will face their fellow Florida team, the Miami Heat back-to-back. Friday the Heat will make the trip to the Amway center then the Magic will travel to American Airlines Arena Sunday.