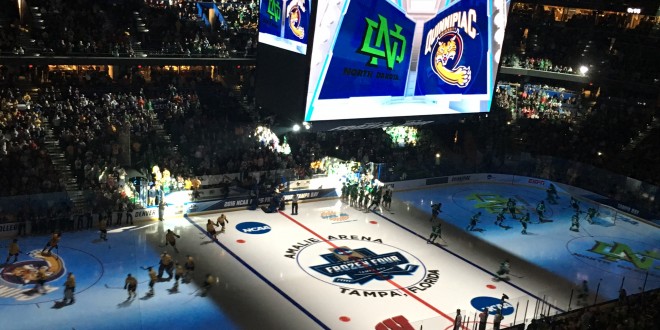 The North Dakota Fighting Hawks are the 2016 NCAA Men’s Hockey National Champions after a 5-1 victory over Quinnipiac on Saturday night in Tampa.

The score wasn’t indicative of the game, as it was a one goal contest at the end of the second period before the tournament’s Most Outstanding Player Drake Caggiula netted two goals in the third, effectively ending Quinnipiac’s incredible run.

The No. 1 vs No. 2 matchup featured the two teams with the most wins, highest winning percentages, and most weeks spent at No. 1 this season. North Dakota’s NHL prospect-filled team (12) looked the part of a juggernaut on Saturday night, winning the school’s eighth national title in its 14th appearance. 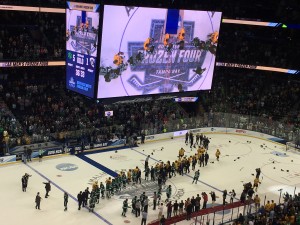 North Dakota head coach Brad Berry became the first coach to win the national championship in his first year with a collegiate program.

Berry attributed the win to leadership and wearing down the opponent.

It was a chippy, fast-paced first period, and the thousands that made the trip down from Grand Forks, North Dakota were elated early on when forward Shane Gersich followed up a Gage Ausmus shot and put the rebound into the open net for a 1-0 Fighting Hawks lead.

The team scoring first had won 53 of 69 national championships.

Then a mistake on the power play by Bobcats goalie Michael Garteig left the net completely open for Brock Boeser, who calmly tapped in the shorthanded goal and put North Dakota up 2-0 for the second consecutive game.

Quinnipiac got one back, as their power play unit (fourth in the nation) scored three seconds into a five man to three advantage they had at the end of the first period. Brothers connected as Tim Clifton found the upper corner of the net, assisted by Connor Clifton and Travis St. Denis.

The officials really let the two teams play, as it was a physical 60 minutes of hockey featuring hit after hit.

The second period featured a flurry of opportunities, but no goals. In the last three years, the Fighting Hawks were 70-0-5 when leading after two periods.

It took a minute and 11seconds for North Dakota to extend that lead to two goals in the final period of the season, as Drake Caggiula took a cross ice pass from Thursday’s hero Nick Schmaltz and roofed it into the goal.

North Dakota is 18-0 when Caggiula scores, and he made sure his team didn’t blow this lead, scoring two minutes later.

Senior forward Drake Caggiula spoke about turning up the intensity in the third period.

The game got out of hand when Austin Poganski scored with 9:19 left, as the Fighting Hawks win the national championship game 5-1.

Quinnipiac head coach Rand Pecknold gave credit to North Dakota’s talent, saying they are the best team in the country.

Tournament Most Outstanding Player Drake Caggiula finished the Frozen Four with two goals in each game, and five total points. 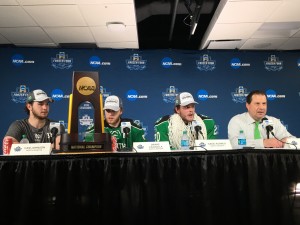 Brock Boeser led all Frozen Four players with 60 points on the season; he had four points in the title game (one goal, three assists).

This is North Dakota’s first national championship since 2000, as they now sit alone in second place with eight titles, one behind Michigan. They are now 4-0 all-time vs Quinnipiac, outscoring the Bobcats 19-5 in those games.

19,358 were in attendance, making it the third most attended championship game ever.