Orange and Blue Debut – The Stars in White

Leading into tonight’s Orange and Blue spring exhibition, question marks surrounded the quarterback position. With the news of Purdue-transfer Austin Appleby enrolling at the University of Florida, along with early-enrollees Kyle Trask and Feleipe Franks, the quarterback battle was game on for the spring. But tonight Luke Del Rio showed that he is the front-runner for getting the first snap against the University of Massachusetts on September 3. 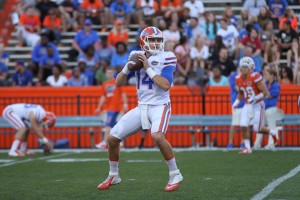 On the opening possession of the game Del Rio led the offense down the field on a 75-yard touchdown drive for the Blue team. Wide receiver, CJ Worton came up with an explosive 46-yard play for Del Rio’s first completion of the game. On Del Rio’s second completion, he found tight-end DeAdnre Goolsby for a 14-yard touchdown pass. The crowd on hand roared loudly, bringing back some fall nostalgia.

But those cheers were overshadowed by something even more pivotal than the success of a potential starting quarterback.

One of the crowd’s loudest moments was when Eddie Pineiro made the extra point after Del Rio’s touchdown. Something Gator fans weren’t used to seeing last season.

After a successful PAT, Pineiro attempted his first field goal of the evening. A 52-yard field goal try, kicking from the logo at midfield. The kick went up (over the lineman), and straight through the uprights. To make things even better, the No. 1 ranked kicker in the nation slotted home a 56-yard field goal as well. Pineiro finished 3-5 on FG’s and 5-5 on PAT’s. He even talked coach McElwain into letting him kick the 56-yarder which set an Orange and Blue game record.

Another standout during the Orange & Blue Debut was junior college transfer Mark Thompson, who made 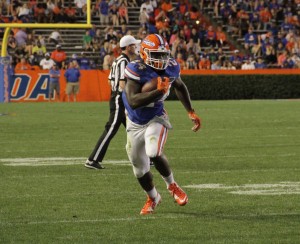 the Swamp his home despite never playing in front of a crowd that large. The 6’2 242 pound running back shined in the second quarter when he took off on a 26-yard touchdown run.

Thompson made a hard cut at the line of scrimmage and burst through the hole on the right side; his quick burst of speed left defenders frozen, but he praised the blocking for creating that opportunity. Thompson finished the night with 46 rushing yards on five carries and three receptions for 25 yards.

Final stats for the QB’s

Feleipe Franks: 5-or-11 completed passes, one touchdown, and three interceptions

Despite Luke Del Rio’s success, he still believes there’s an open competition for quarterback. Austin Appleby and Del Rio are the two main contenders for the starting role. Kyle Trask showed promise for the Gator future with a strong arm and accurate completions; his pocket presence set him apart from the other early-enrollee Feleipe Franks.

The four star recruit Franks tough outing began when his first pass of the game was intercepted. Things got even worse as the next three passing attempts resulted in two interceptions. His play tonight slides him down to potentially receiving a redshirt year.

The 2016 Orange and Blue Debut was seen as a big success by Coach McElwain. It also allows him to spend time with the recruits visiting the University of Florida throughout the weekend.

The Blue team defeated the Orange squad by a score of 44-6. A mix of first stringers and second stringers played on both teams and interchanged throughout each quarter. The next step for Florida football will be during summer when the likes of Tyrie Cleveland, Antonneous Clayton, and Jeremiah Moon joins the team.

Originally from Ocala, Florida. University of Florida Class of 2017. Avid FIFA player willing to beat anybody. Follow me on Twitter for everything you need to know!
@JoshLaSelva
Previous Gators Open Up Series Against Miss St With a Win
Next North Dakota Wins Eighth Men’s Hockey National Championship