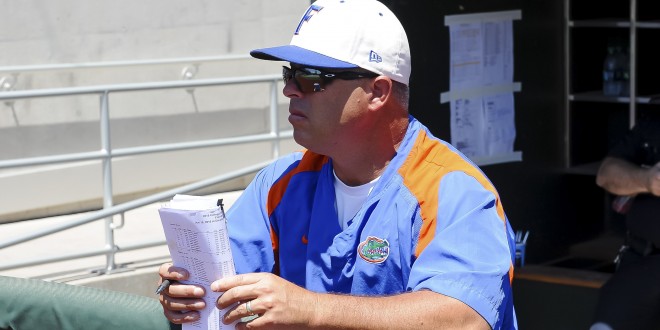 Florida baseball (29-5) will head to Tallahassee Tuesday night to conclude the season series against in-state rival Florida State (22-8) at Dick Howser Stadium. The Gators are currently ranked No. 3 in the nation, while the Seminoles come right in behind them at No. 4.

Florida fell from the top spot in the country after losing two of three to Mississippi State this past weekend. The Bulldogs took down the Gators on Saturday 1-04 to snap the orange and blue’s 29 game winning streak at McKethan Stadium. They then handed the Gators their second series loss of the season with a close 2-1 victory on Sunday. Junior Shaun Anderson knows the team will be fired up this Tuesday after dropping two games to Mississippi State.

The Gators have the Seminoles number this season taking both games so far. Florida shutout Florida State 6-0 in Gainesville back on March 15 and notched a 3-2 win over the Seminoles in Jacksonville on March 29.

Jackson Kowar (3-0, 3.58) gets the nod for the Gators on Tuesday making his second start against FSU this season. Kowar pitched against the Seminoles on March 29 in Jacksonville and earned the win with five innings of work. He gave up just one run on five hits and struck out four batters. The Noles will send redshirt sophomore Ed Voyles (o-o, 1.64) to the mound.

The Gators have won the last four meetings between these two teams dating all the way back to last season, but under head coach Kevin O’Sullivan Florida is only 4-5 against the Noles when playing in Tallahassee.

First pitch for this game is scheduled for 6 p.m. but you can tune into Country 103.7 The Gator at 5:55 p.m. for the call with Jeff Carodzza and Steve Russell.

Im a senior at the University of Florida currently pursuing a degree in Telecommunications. I work for ESPN Gainesville 95.3 and anchor the Monday sports broadcast for WUFT First At Five. Im from New York and an avid sports fan of all New York teams.
Previous Golden State Ties, Looks to Surpass 1995-96 Bulls
Next Men’s Golf Team Looking Towards SEC Championship