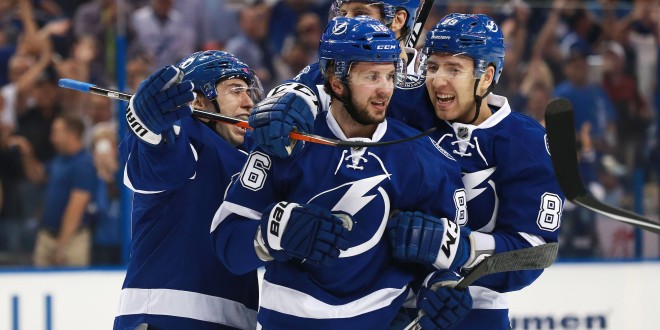 Apr 13, 2016; Tampa, FL, USA; Tampa Bay Lightning right wing Nikita Kucherov (86) is congratulated by defenseman Nikita Nesterov (89), center Tyler Johnson (9) after he scored the against he Detroit Red Wings during the first period in game one of the first round of the 2016 Stanley Cup Playoffs at Amalie Arena. Mandatory Credit: Kim Klement-USA TODAY Sports

The opening round of a playoff series for the Tampa Bay Lightning ended differently than usual.

Lightning Center, Alex Killorn, said that he was glad to start their Stanley Cup run with a win in an opening game.

Even with the absence of star Steven Stamkos, the Lightning offense stepped up to provide critical goals down the stretch including this game winner from Killorn.

Last year during the opening round of the playoffs, the Detroit Red Wings and Tampa Bay Lightning traded games until the Lightning took Game Six and Game Seven consecutively. For Tampa, they want to continue their momentum by forcing Detroit into a 2-0 series hole. This will be a pivotal game for the Red Wings before their home games in Detroit for Games 3 and 4.

Game 2 of the series makes a significant difference. A big Tampa win gives the Lightning an added boost to take at least one game in Detroit. A Red Wings win ties up the series and can swing the momentum ahead of the Detroit home games.

Originally from Ocala, Florida. University of Florida Class of 2017. Avid FIFA player willing to beat anybody. Follow me on Twitter for everything you need to know!
@JoshLaSelva
Previous Gators Baseball Snags Series Opener Against Arkansas
Next Preview: No. 1 Florida Softball Faces No. 4 Louisiana at Lafayette