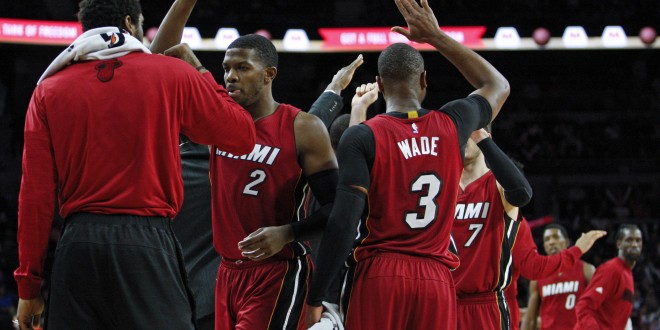 Despite a collapse against the Boston Celtics Wednesday, the Miami Heat are still a great team. After all there is a reason why this “dark horse” of the playoffs is entering as the third seed in the East.

For game one of the first round of the NBA playoffs the Heat will host the Charlotte Hornets. This matchup can prove to be a clash of different styles of game play as the Heat are complete opposites to the Hornets. The Heat play at a slower pace which is understandable for the age of the roster and depend on the defense for their wins. However, the team is very capable of picking up the pace of the game when adding players like Goran Dragic to run the court. Dragic might have a hard time living up to the talent of other Heat players like Chris Bosh and Dwayne Wade but he undoubtedly can play like one of the best point guards in the NBA averaging 14.1 points per game.

No one can doubt that Dwayne Wade leads the way Miami plays its games. Although he is at the tail-end of his career, he finds holes on the court and dribbles his way past defenders. When the ball is in his hands, he takes his time and stages plays that rarely ever fail to impress. Despite the talk about his age and his career in the NBA slowly coming to an end, Wade still remains to be one of the best guards in the league. Wade knows how to shoot, defend, and his years of playoff experience will only help the Heat in their journey through the playoffs.

What makes this trip to the playoffs different from Miami’s many other chases towards the championship is the team is not so reliant on Wade. The Heat have the shot blocking abilities of Hassan Whiteside to look towards when it comes to defense. If Whiteside finds his happy medium during the playoffs, the Heat will make it difficult for other teams to find their way to the basket.

Another player that will be a key component for the Heat’s success in the playoffs is Joe Johnson. Johnson has proven to be the three-point shooter the team has desperately needed. Since joining the Heat, Johnson has shot 40 percent plus from deep. Miami can bank on him to rack up the points for the team when they need it the most.

The Heat do not expect to have Chris Bosh back for the playoffs as he as been out with blood clot issues. The last game Bosh played in was on February 9 against the San Antonio Spurs.

The Heat do have their kinks but when the team is playing at its maximum potential, they are a huge threat for opponents. Fans can expect the Heat to put up a fight during the 2016 playoffs. The Heat and the Hornets are a great matchup for the first round but Miami does have a slight advantage playing on home court for game one. The Hornets will have to rally to get past the strong Heat defense if they plan on taking the first victory. Game time is set for Sunday at 5:30 p.m.