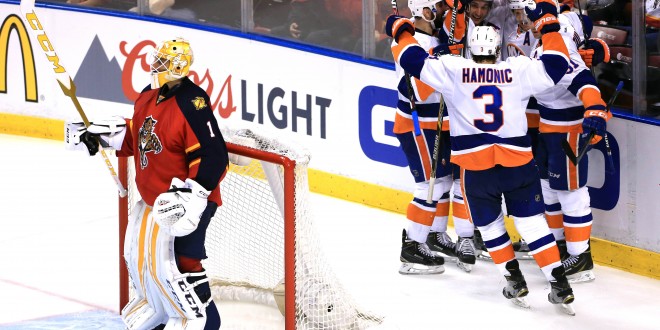 The Florida Panthers returned to the playoffs for the second time in 15 years. The New York Islanders haven’t won a playoff series in 23 years.

One of these two teams will inevitably advance to the next round despite their longtime organizational woes.

This season has new hopes for both teams, and the Panthers are arguably the favorites to win the Stanley Cup. But the Islanders are making their own waves as they over matched the Panthers defense with their potent offense in Game 1.

The Islanders look to capitalize on power plays just like they did last night. Their well worked build-up play, coupled with a fantastic shot resulted in a quality goal such as this one from Frans Nielsen.

Despite their defensive miscues, the Panthers won’t look to change anything offensively according to winger Teddry Purcell. The cats peppered the Islander’s goalie Thomas Greiss with 42 shots.

Led by John Tavares, the Islanders have been to the playoffs three of the past four seasons but have yet to actually win a series. Tavares hammers home about being consistent throughout the series.

The Islanders find themselves up 1-0 against the Panthers and a Game 2 win could put them over the edge as they head home for games 3 and 4.

Originally from Ocala, Florida. University of Florida Class of 2017. Avid FIFA player willing to beat anybody. Follow me on Twitter for everything you need to know!
@JoshLaSelva
Previous Preview: No. 1 Florida Softball Faces No. 4 Louisiana at Lafayette
Next Bridget Sloan Takes the Floor One Last Time