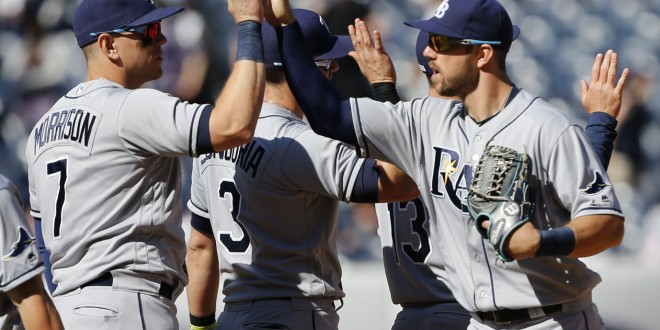 It’s never too early in the Major League Baseball season for a road victory within the division to be meaningful, as the Rays found out on Sunday afternoon at Yankee Stadium.

After the Rays dropped the first two games of their weekend series against the Yankees, Sunday’s 8-1 rout of New York meant not only avoiding the sweep but also that they’ll head into their series against the division-leading Orioles with some momentum. Rays manager Kevin Cash shared the sentiment that the win was a big one, and hopes his team can carry that into their matchup with Baltimore.

Leading the way for the Rays at the plate against the Yankees was right fielder Steven Souza Jr. who, on his birthday no less, hit two home runs and had three RBI on the afternoon. Joining Souza on the power outburst front were teammates Logan Forsythe, Corey Dickerson, and Steven Pearce for a total of five Tampa Bay home runs.

Win and 2 HR at Yankee Stadium for @SouzaJr on his birthday: "Better than the Ninja Turtles I got as a kid." #RaysUp pic.twitter.com/XTlyxpO81E

The hefty run support was more than enough for starter Drew Smyly, who held the Yankee offense to six hits and one run in his seven innings of work. Manager Kevin Cash has been pleased with Smyly’s performances as of late, and Sunday was no exception.

The Rays will be hoping that success will carry over into their series against the Orioles, especially with starting pitcher Chris Archer (0-4, 7.32 ERA) on the mound. Archer, who was expected to be an ace-like figure, has allowed the most home runs in the Majors (6) so far this season. That, coupled with facing off against the best power-hitting offense in the league could prove to be a recipe for disaster.

Oriole stars Chris Davis and Manny Machado in particular have enjoyed success against Archer, with Davis hitting .357 and Machado an impressive .409 in 22 at bats.

The Rays and Archer will hope he can revert back to his 2015 form, where he had a 3.23 ERA as part of an All-star campaign.

The Orioles (11-6) will counter with Kevin Gausman, who is making his season debut after starting the season on the disabled list.