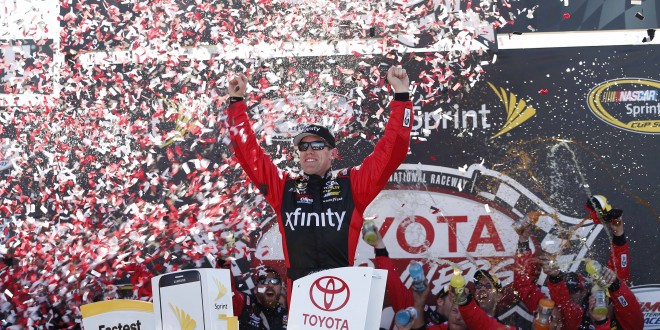 Carl Edwards stuck it to his Joe Gibbs Racing teammate Kyle Busch, literally, after bumping Busch out of the lead in the final corner of the final lap to claim his second consecutive Cup Series race victory.

Edwards led 149 of the first 229 laps, but as time progressed the handling of his car regressed, making it difficult to stay in the top five. A series of late race cautions allowed for Edward’s pit crew to make the adjustments necessary for the come from behind win and the first ever last-lap pass win at Richmond International Raceway.

It was a great day all around for the Gibbs Racing team, placing four of its Toyotas in the top seven, however if you ask Busch he might think differently.

As the two teammates took the white flag, Edwards looked confident and in control, leading Turn 1 and just slightly ahead in Turn 2. Edwards inched closer and closer behind Busch’s bumper heading into the back straight of Turn 3 before making his “bump and run” move in Turn 4 to take the checkered flag.

Busch led 35 of the race’s 36 last laps, but Edwards says Busch was well aware he was sneaking up from behind with the intention to win.

With Edward’s Toyota Owners 400 victory this weekend combined with his win at Bristol Motor Speedway last week, he has now claimed 27 career race wins, the lead spot in the Sprint Cup championship, and one more victory back flip under his belt.

The back flip lives @NASCAR congratulations to Carl Edwards on the win #FoodCity500 pic.twitter.com/F3WpiTwVu6

The top ten winners from Sunday’s Toyota Owners 400 in Richmond, VA include:

Another race notable was the return of Tony Stewart (19th), who missed the first eight races of the Cup season after suffering a spinal fracture in a sand buggy accident in early February.

Tony Stewart was flat giddy after the race at Richmond.
So happy to be back.
"It reminded me how much I love it." pic.twitter.com/zh7HKOawxA

Next up will the Geico 500 Sprint Cup race from Talladega Superspeedway on Sunday, with the return of an old friend to racing.

The. No. 88 Chevrolet car of Dale Earnhardt Jr, famously known as “Amelia” will make its return to the track after being stored from this year’s Daytona 500 wreck.  Earnhardt Jr. was racing to the front of the field before smashing his inside barrier, smashing the sheet metal and denting the car’s frame.

For all those asking, it is time. Amelia will be making her return to the track this weekend. @TeamHendrick did a great job fixing her up.