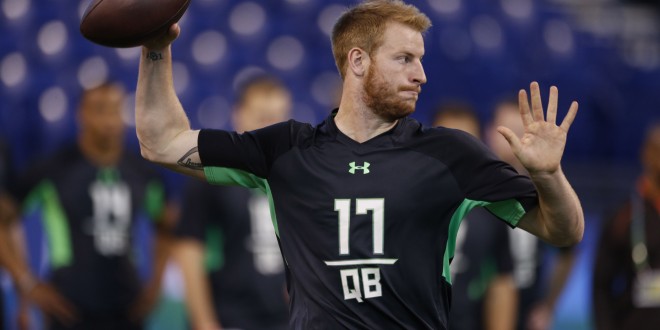 ‘Tis the season for Mock Drafts.

While that’s definitely not how the song goes, it’s hard to deny the truth of the above statement with the 2016 NFL Daft approaching in just two days. Whether by fans or by analysts, mock drafts have taken over the internet and television the last few weeks. With such major changes like the trade between the Tennessee Titans and the L.A. Rams, it’s hard to not change around a mock draft.

From the very beginning though, NFL expert Cris Collinsworth seemed to know the Rams would end up with the No.1 pick, a change he predicted in his first mock draft. Since he predicted this trade that should mean who he predicted for the Rams to pick, should not have changed.

In his latest mock draft released Monday though, Collinsworth changed his prediction on who he believed the Rams would take.

Collinsworth says the Eagles’s move for the second pick of the draft was probably a result of Eagles owner Jeffrey Lurie’s desire to have options for a good quarterback.

With two quarterbacks predicted to be picked in the top ten of the first round of the 2016 NFL Draft, Collinsworth only has one receiver going to a team in the top ten picks in his mock draft, Baylor’s Corey Coleman. In Collinsworth’s mock draft, the New York Giants (who have the tenth pick of the first round) is the team who has a need for a wide receiver.

Collinsworth says the Giants could benefit from having another main wide receiver other than Odell Beckham, Jr., who caught for 1,450 yards and averaged for 15.1 yards per reception last season.