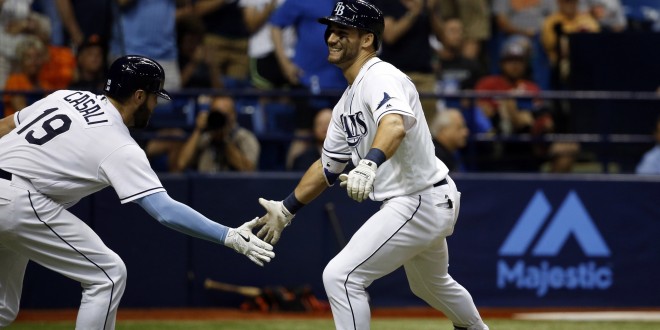 After getting off to a poor 3-7 start through the first ten games this season, the Tampa Bay Rays may finally be finding their rhythm. The Rays defeated the Baltimore Orioles 3-1 Tuesday night to win the series versus the Orioles. The Rays have now won three straight and three of their past four series. Tuesday’s victory gives Tampa Bay a 10-10 record this season.

The Rays took the early lead on Tuesday after Logan Forsythe scored a run off a sacrifice fly from Desmond Jennings in the bottom of the third. The Orioles quickly answered in the top of the fourth, tying the game 1-1 after Mark Trumbo’s single scored Chris Davis.

After a scoreless fifth inning, the Rays finally took the lead in the bottom of the sixth after Kevin Kiermaier hit his third home run of the season to score himself and Steven Souza, Jr. The Orioles were unable to answer, and the Rays went on to win the game 3-1.

Following the game, Kiermaier said it was good to capitalize late in the game because the Rays had missed several opportunities earlier in the game.

The Rays will go for the sweep against the Orioles Wednesday night at 7:10 p.m.

Junior telecommunication student at the University of Florida. Passionate about all things related to sports.
@@EllenBazley
Previous Monday Night in the NHL
Next Lightning Set to Begin Second Round Series Tonight Against New York Islanders