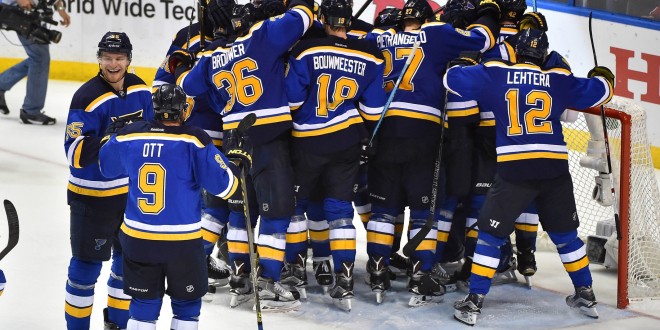 Monday Night in the NHL

Monday night we saw a series end, and one continue with one final showdown.  The Chicago Blackhawks were dethroned by the St. Louis Blues, and the Nashville Predators force a Game 7 against the Anaheim Ducks.  The NHL Playoffs have been anything but easy this year.  No team has forced a sweep in the first round for the first time since the 2012 NHL Playoffs.

It was a joyful night in St. Louis last night as the Blues defeated the Blackhawks 3-2 in Game 7.  The Blackhawks stormed back from a 3-1 series lead of the Blues winning both Game 5 and 6 forcing every Blues nightmare, a Game 7.  The Blues struck early as Joe Lehtera scored for the Blues in the first minute of the game—his very first NHL Playoff goal ever.  The Blues added one more as Colton Parayako scored in another goal in the 14th minute, his second goal of the series.  The Blackhawks cut the lead in half to end the first period as Marian Hossa scored his third goal in the series in the 19th minute.  The Blackhawks not satisfied, quickly capitalized on a power play early in the second period as Andrew Shaw launches a shot in the goal evening the score 2-2. 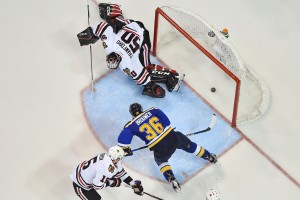 Fate was on the Blues side that night as Troy Brouwer in the eighth minute in the third period misses his opening shot, follows with the rebound launching it in for the game winning goal.  Brouwer is a familiar face for the Blackhawks having brought home the Stanley Cup for the Blackhawks in the 2009-10 season, exorcising demons winning their first Stanley Cup since 1961. Though, Brouwer exorcised the Blue’s demons last night as he advances the Blues to the second round for the first time in four years.  This brings them one step closer to ending the Stanley Cup drought, hoping to win their first ever Stanley Cup since their founding in 1967. The Blues not only advance but potentially ended the Blackhawks dynasty last night, as they won three of the last six Stanley Cups.  Patrick Kane, second highest scorer in the league and prominent Blackhawk player, believes the lack of defense was the reason why the Blackhawks lost the series. Obviously, the Blackhawks were not happy with the end result but there is always next season. For the Blues it’s one step closer to the Stanley Cup with a series against the Dallas Stars next up. 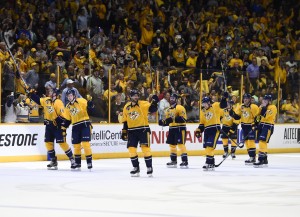 The other featured game last night was Game 6 of the Nashville Predators and the Anaheim Ducks in Nashville.  Coming into the game the Ducks had a 3-2 advantage in the series.  The Predators stopped the bleeding against the Ducks winning Game 6 3-1 after dropping the last three games forcing a Game 7.  This is uncharted territory for the Predators as they have lost the last five Game 6’s they’ve played, and never have played a Game 7 in their 17th franchise season. 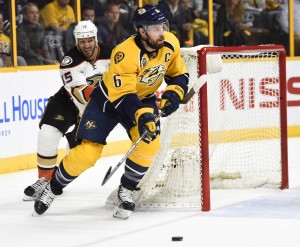 The Predators look to beat the Anaheim Ducks, to advance to the Conference Semifinals for the third time in franchise history.  The Ducks are no stranger to playoff success winning the Stanley Cup in 2006-2007 and getting to the Conference Finals last year.  It all comes down to Wednesday at 10 p.m. in Anaheim. Winner of the game plays a series against the San Jose Sharks.