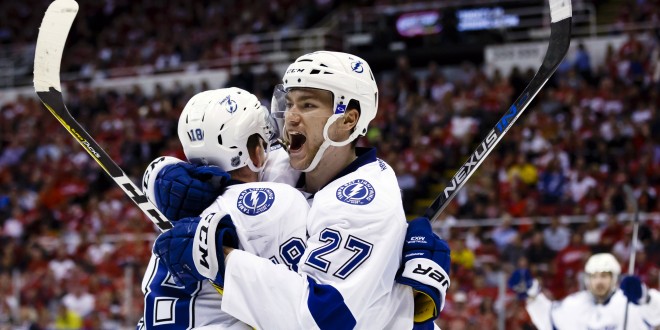 The Tampa Bay Lightning kick off their Eastern Conference second round playoff series against the New York Islanders tonight at 7 p.m. at Amalie Arena.

The Lightning are coming off a 4-1 series victory against the Red Wings that saw Tampa Bay outscore Detroit 12-8. The line of Tyler Johnson, Alex Killorn and Nikita Kucherov was fantastic, scoring 10 of the Lightning’s 12 goals. Tampa Bay was also dominant in the penalty kill, allowing one goal in 25 power play opportunities for the Red Wings.

The Lightning were without captain Steven Stamkos against Detroit, and the superstar center is expected to be out against the Islanders as well. Stamkos has been sidelined for over three weeks with blood clots next to his right collarbone. However, he was able to practice on Tuesday for the first time since his diagnosis.

The four-time All-Star says that it was great to simply be around his teammates again by participating in Tuesday’s practice.

Tampa Bay will also be without defenseman Anton Stralman (fractured left tibia) and forward J.T. Brown (upper body) for the beginning of its matchup against New York, though head coach Jon Cooper has hope that both players will be available later on in the series.

For the Islanders, their defeat of the Florida Panthers gets them to the second round of the postseason for the first time since 1993. New York is led by center John Tavares, who scored five goals and added in four assists in the Islanders win over Florida.

New York is also currently without starting goalie Jaroslav Halak, who hasn’t played since March 8. Thomas Greiss filled in nicely against the Panthers in Halak’s absence, making 40 saves in Games 1, 5 and 6.

The winner of the series between the Lightning and Islanders will advance to the Eastern Conference Finals, where they will face either the Washington Capitals or the Pittsburgh Penguins.