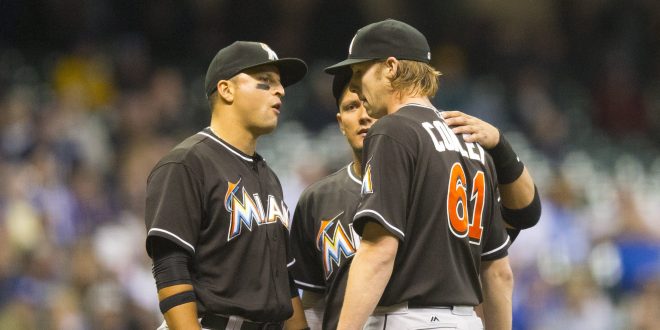 The Miami Marlins will play Game 3 of their series against the Milwaukee Brewers tonight. The Marlins weren’t able to defeat the Brewers last night 10-2 in Game 2.

Pitcher Adam Conley’s bid for another hitless outing against the Brewers did not last long when he could not bring the same results as an April 29 7 2/3 hitless outting. Conley gave up seven hits and four runs in four innings.

Don Mattingly who is the manager for the Marlins speaks on how the Brewers were successful against Conley.

Conley could not hold an early 2-1 lead, which allowed the Brewers to take advantage of Miami’s sloppiness to score three runs in the fourth inning as well as a hit batter, a walk, two stolen bases, two throwing errors and a wild pitch that scored the final run for the Brewers.

Jose Ureña, the reliever for the Marlins, failed to cover first on a grounder in the fifth inning, which allowed the Brewers another run.

The Marlins scored in the second and third inning and only had eight hits making is their 19th consecutive game with eight or more.

Wei-Yin Chen who has a 4.66 ERA will be starting for the Marlins and will be facing Chase Anderson who has an ERA of 10.31; first pitch is set to go at 7:10 p.m Wednesday.