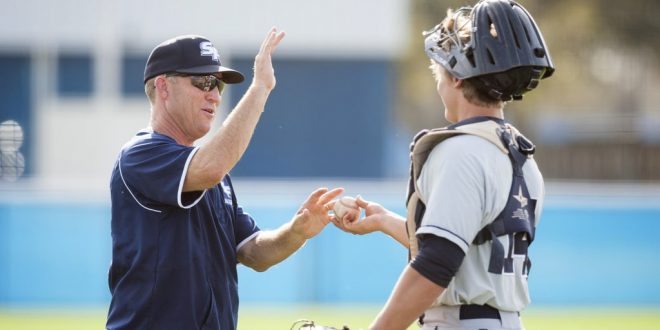 When the Santa Fe College Saints (38-7) begin play in the FCSSA State Baseball Tournament, they will do so as the top team in the National Junior College Athletic Association Division I. No. 1 Santa Fe College begins tournament play this weekend in Lakeland, Florida, after a stellar regular season, where the Saints posted 38 wins (a program record) and won the Mid-Florida Conference title. Now the Saints have a chance to capture the 10-team state tournament championship, with the winner moving on to the Junior College Baseball World Series. Santa Fe’s first opponent in the tournament will be Eastern Florida State College.

Quick Fact: Heading into @TheFCSAA Tournament May 15-21 in Lakeland, the Saints have the fewest losses in the nation w/ seven (NJCAA Div 1)

Saints head coach Johnny Wiggs, who was named the Mid-Florida Conference coach of the year, says Eastern Florida State College has a well-rounded team. The Titans’ pitcher, Blair Calvo, has the lowest ERA (0.97) in the NJCAA Division I.

In regards to his team, Wiggs says his team may not have a bunch of superstars, but they are a good team, as a whole. The Saints placed seven players on the All Mid-Florida Conference team, two on the first team and five on the second. Freshman pitcher Troy Bacon was also named the MFC pitcher of the year. Bacon is second in the NJCAA Division I in saves with 14.

Wiggs said the reason why the Saints have been so good is because of their depth, and the team needs production from all over the lineup in this upcoming tournament.

Junior telecommunication student at the University of Florida. Passionate about all things related to sports.
@@EllenBazley
Previous No.2 Gator Lacrosse To Host NCAA First And Second Rounds
Next Gator Women’s Tennis Blasts Through the First Round of The NCAA Tournament