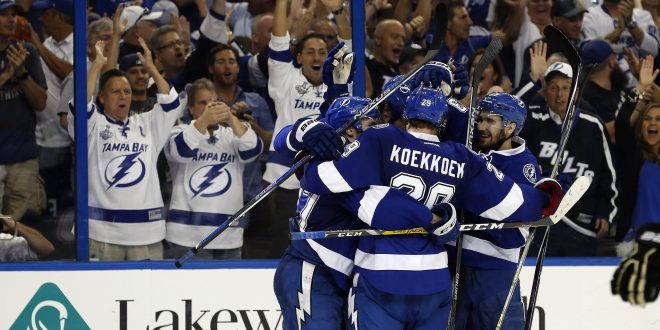 May 24, 2016; Tampa, FL, USA; Tampa Bay Lightning center Brian Boyle (11) is congratulated after he scored a goal against the Pittsburgh Penguins during the third period of game six of the Eastern Conference Final of the 2016 Stanley Cup Playoffs at Amalie Arena. Mandatory Credit: Kim Klement-USA TODAY Sports

The Tampa Bay Lightning were just one win away from heading to the Stanley Cup Finals, but fell short to the Pittsburgh Penguins in Game 6.

The Penguins extended the Eastern Conference final to Game 7 with a 5-2 win on Tuesday night. The Penguins goalie, Matt Murray, made 28 saves, 17 of those made in the third period. Scoring for the Penguins were Phil Kessel, Kris Letang, Sidney Crosby, Bryan Rust and Nick Bonino. For the Lightning Bryan Boyle scored twice..

The Lightning could have had a 1-0 lead during the first period with a goal from Jonathan Drouin but the Penguins challenged the goal and it was determined there was an offside on the play, nullifying the goal.  Kessel gave the Penguins a 1-0 lead in the first period on a power-play goal when Victor Hedman joined Anton Stralman in the penalty box on a delay of game penalty. During the second period Pittsburgh took a 2-0 lead on Letang’s goal with Patrick Hornqvist providing a screen. Later Crosby scored his third-game winning goal of the series with 26 seconds remaining in the second period to make the score 3-0.

Boyle was than able to score his first goal of the night at 5:30 of the period, which came when his pass to Brandon Coburn was tipped by Kessel. Boyle than made it a 3-2 game with a wrist shot from the left circle.

Boyle who is a forward for the Lightning had a few words to say about how the Penguins had it going for them during Game 6.

The Lightning will be returning to Pittsburgh for Game 7 of the Eastern Conference final on Thursday, as they try to make it to the Stanley Cups Finals for the second consecutive season.