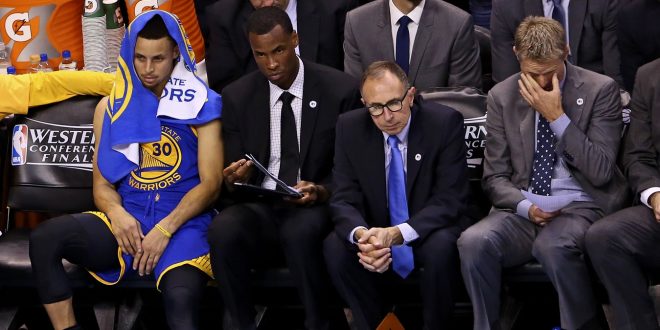 The Golden State Warriors’ dream season may be coming to a close. After setting an NBA record for the most regular season wins, the Warriors are on the verge of elimination from the NBA Western Conference Finals. The Oklahoma City Thunder routed the Golden State Warriors, 118 to 94, in Game 4 Tuesday night to take a 3-1 series lead.

The game was close in the beginning with Golden State only down by four after one quarter of play. However, the Thunder would go on to outscore the Warriors 42 to 27 in the second quarter to take a 72-53 lead at the half. The Warriors were just never able to overcome the deficit after that, and lost their second game in a row, the first time the team has lost consecutive games all season.

With Golden State, it’s not just the fact that the team is losing that is shocking, it’s the way they are losing. Over the past two games against the Thunder, the Warriors have lost by a combined 52 points. After having averaging 111.6 points per game during the postseason, which is first in the league, the Warriors have averaged just 99.5 points over the past two losses.

Warriors’ point guard Stephen Curry, who led the NBA with an average of 30.1 points per game during the regular season, scored just 19 points Tuesday night. Despite speculation, Golden State head coach Steve Kerr said Curry is not injured and just had a bad night.

With Golden State’s offense sputtering, the defense really needs to step up, but the Warriors have had trouble slowing down Kevin Durant and Russell Westbrook. The two Thunder players have both scored over 20 points each in each of the past two games. Combined, the two have scored 125 points over the past two games.

On Tuesday, Westbrook led the Thunder with 36 points, 11 rebounds and 11 assists, a triple-double. Oklahoma City head coach Billy Donovan said the attention Westbrook and Durant get generates offense for other players on the Thunder.

Kevin: "I try to play w/passion every chance I get."
Russ: "I try to use my size and ability to create some havoc." pic.twitter.com/FcXEpZ2KCF

Despite the tough loss, Curry said the series is not over for Golden State. One ray of hope for the Warriors is that the series is now shifting back to Oakland, California at the Oracle Arena.

Game 5 will be on Thursday.

Junior telecommunication student at the University of Florida. Passionate about all things related to sports.
@@EllenBazley
Previous Lightning Head to Game 7 Of the Eastern Conference Finals After Game 6 Loss
Next SEC Baseball Tournament Continues Today in Hoover