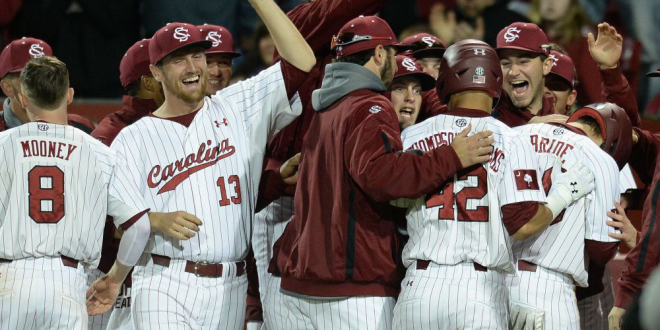 The conference tournament in baseball’s best conference rolls into Round 2 today, featuring the SEC East champions and last year’s College World Series runner-up. Texas A&M and Vanderbilt will get things going in the morning at 10:30 a.m. Then, the first afternoon game of the day will be between Ole Miss and South Carolina.

The morning game has the makings to be the pitching duel of the tournament. Both Texas A&M and Vanderbilt have two of the best three earned run averages in the SEC. These two teams met one another earlier this month in College Station and it was the Aggies that won the series. Vanderbilt could only muster six runs in the entire series and were shutout twice. A&M has some arms and they are not afraid to use them.

The second game of the day will have the No. 2 seed South Carolina against Ole Miss. The Gamecocks absolutely dominated the Rebels in a three-game series in late March. They outscored them 18-6 at Oxford. Ole Miss already has a game under their belts this week after beating Georgia Tuesday 5-1. Head coach Chad Holbrook hopes his Gamecocks come into Hoover motivated and ready to go.

This could go down as one of the best days in #SECBaseball Tournament history. pic.twitter.com/6hox4POWtE