Home / College Football / Hargreaves Adjusting To Life as a Pro 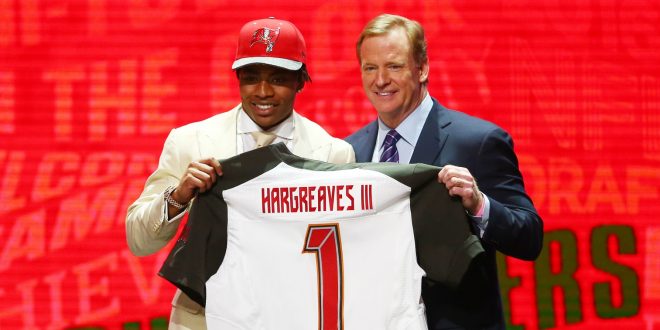 Hargreaves Adjusting To Life as a Pro

Former Gator and current Tampa Bay Buccaneers defensive back Vernon Hargreaves III is set to wrap up his first week of OTAs on Friday. Hargreaves, a two-time all-American and 11th overall NFL draft pick, hopes to be able to carry his reputation of a lockdown corner into the NFL.

Now that the post-draft celebrations are coming to an end, Hargreaves is adjusting to the life of a pro football player and the responsibilities that come with the job.

Throughout his three years at the University of Florida, Hargreaves recorded 121 tackles and 10 interceptions. He was widely known as one of the premier cornerbacks in college football. But, as all players do, Hargreaves had a fair share of doubters leading up to the draft.

Coming in at 5’10” and 205 pounds soaking wet, Hargreaves size came into question around the combine. Size, along with aggressive tendencies to bite on double moves have proven to be Hargreaves’ only true downfall.

Hargreaves did not let the criticism get into his head. He turned into fuel to make him work harder.

However, NFL scout Mike Mayock also had very high praise for Hargreaves. Mayock was quoted saying that he has the best corner feet that he has seen in the past two or three drafts.

Hargreaves drew pre-draft comparisons to former Gator great and two-time Pro Bowler Joe Haden. Hargreaves’ explosive hips and feet allow for him to be able to turn and run with receivers. Along with this quickness comes a 39-inch vertical jump. With this ability to go up and over receivers to high point the ball, Hargreaves should excel at the higher level.

Hargreaves seems to have adjusted to life back at home in Tampa as well. He has made appearances at Lightning games and even local bowling alleys.

And when asked about what Hargreaves looked forward to most about being in the NFL, he responded: “two things, being on Madden and getting your own trading card. That’s what we look forward to the most.”

It seems like VHIII is adjusting to the life as a pro football player just fine and enjoying every moment of it.

The Buccaneers pass coverage ranked 17th in the NFL in 2015, but with the addition of Hargreaves and four-time Pro Bowler Brent Grimes, the Bucs should have a much-improved pass defense in the seasons to come.