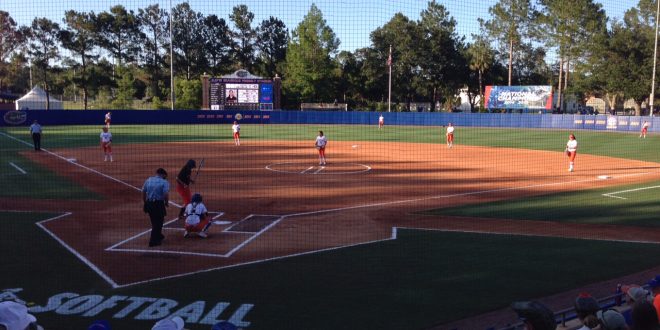 After coasting through the NCAA Regional with three shutout victories, the Gator softball team found themselves on the receiving end of a shutout Thursday night. The Florida Gators (56-6) fell to the Georgia Bulldogs (44-18) 3-0 in the opening game of the Gainesville Super Regional.

The Gators were stumped by the Bulldogs’ defense, which played phenomenally. One of the highlights was from Georgia second baseman Alex Hugo, who made a nice defensive play in the bottom of the third—after the ball got past first baseman Tina Iosefa, Hugo dove to the ground and scooped it up before tossing it back to Iosefa to send the Gators’ Kayli Kvistad out.

ICYMI: Now THAT'S backing up a teammate! What a play by Alex Hugo! #D1softballhttps://t.co/hEEfBXJwIf

On the other hand, Gator pitcher Delanie Gourley did not have a great night, giving up seven hits, which ties her season-high.

The first score of the game for the Bulldogs came during the top of the fourth after an RBI single to right field from Maeve McGuire scored Alyssa DiCarlo. It was the first earned run the Gators have given up in an NCAA Super Regional since 2014.

McGuire would score DiCarlo again in the top of the sixth with a hit up the middle. Moments later, Brea Dickey would extend the Bulldogs’ lead, scoring off an RBI from Katie Browne.

Georgia’s defense managed to hold off the Gators for the next two innings, and the Gators fell 3-0.

Despite the loss, Florida head coach Tim Walton said he does not believe his team played poorly.

Florida will face Georgia again on Friday at 5 p.m. With a Women’s College World Series berth on the line, the Gators have to win the next game to force a third contest with the Bulldogs.

Junior telecommunication student at the University of Florida. Passionate about all things related to sports.
@@EllenBazley
Previous Hargreaves Adjusting To Life as a Pro
Next Gator Baseball Defeats Alabama in SEC Tournament