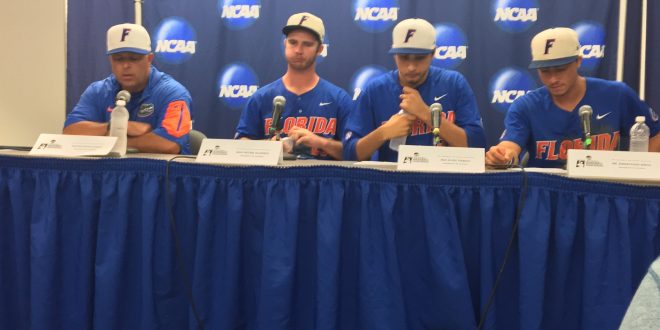 Starting with a dominant pitching performance from starter Alex Faedo, the Florida baseball team (50-13) beat Georgia Tech (38-23) 10-1 Sunday to win the Gainesville Regional that will set up a date with FSU in a Super Regional this weekend in Gainesville.

#Gators have 50 wins for the 5th time in UF history. It's the 3rd time we've had 50 wins under Coach O'Sullivan. pic.twitter.com/OnuDbHhsQ7

Faedo improved to 13-1 after earning the win for Florida, while Cole Pitts took the loss for the Yellow Jackets and fell to 3-4 on the year. Gator baseball head coach Kevin O’Sullivan says Faedo’s precise pitching helped Florida keep an early lead.  That lead was 1-0 after the first inning after an RBI hit from Mike Rivera.

The score would stay that way until the fifth inning when the Gators struck again. Nelson Maldonado doubled after drilling a line drive down the left field line. Maldonado would then score, opening up a 2-0 lead after a Jonathan India’s single. Georgia Tech head coach Danny Hall brought Keyton Gibson in to relieve Cole Pitts on the mound.

Peter Alonso nearly got a third home run in three games, a hit to deep centerfield that bounced off the wall that plated India. The lead was extended to four runs after Alonso came in via a JJ Schwarz double that rode the left field line.

While Faedo was mowing down Tech hitters, the Gator offense kept adding runs. Florida’s sixth inning started well as Deacon Liput walked and then advanced to third following Gibson’s throwing error at first base. Maldonado also walked and a Danny Reyes single to left field easily scored Liput.  The Yellow Jackets then made their second pitching change as Jared Datoc stepped on the mound for Gibson.

Florida continued its offensive outing despite the change, as India walked before Alonso nailed a two-RBI single to right field. Schwarz also got in on the action with a single as Florida went up 8-0. Florida saw two more pitching changes in the top of the ninth as Bobby Gauvreau stepped in before being replaced by Zac Ryan. Buddy Reed ran in Florida’s ninth score after a wild pitch from Ryan, while Dalton Guthrie’s ground out scored Liput to make it 10-0.

Gator left-hander Scott Moss started the ninth inning for Florida, coming in to relieve Faedo who finished the night with 10 strikeouts. Georgia Tech threatened with loaded bases in the bottom the ninth, but the Yellow Jackets only managed an unearned run. Shaun Anderson came in for relief on the mound, striking out Pabst before Florida’s defense wrapped the game up.

Alex Faedo says sweeping the Gainesville Regional helps Florida’s momentum as they prepare for next weekend’s match up against Florida State. The Gators swept FSU in last year’s Super Regional from McKethan Stadium, outscoring the Seminoles 24-9 and advancing to the College World Series for the first time since 2012.

Florida will face FSU next weekend in the Super Regionals. pic.twitter.com/lY0Bg646sg

I'm a senior studying Political Science at the University of Florida. Multimedia Sports Reporter for ESPN Gainesville 95.3 and WUFT - Passionate about life, sports, and fitness.
@charliejordanuf
Previous Florida State Seminoles Advance To Super Regionals
Next Marlins and Rays on the Road