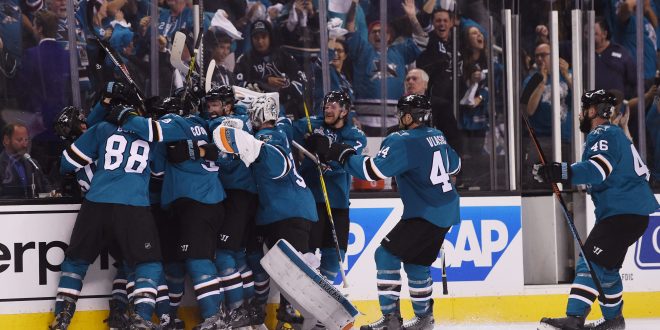 The Stanley Cup Finals continues tonight with the Pittsburgh Penguins visiting the San Jose Sharks. The Penguins currently lead the series 2-1. Monday’s game can either determine if the Sharks tie up the series or making it just one win away for the Penguins to hoist the Cup.

Tomas Hertl for the Sharks will not be playing tonight due to a lower-body injury. This will be the second straight game Hertl will miss after taking a hit from Penguins forward Patric Hornqvist in Game 2 of the series. Replacing Herlt tonight will be Melker Karlsson.

The Sharks won Saturday night’s game after an overtime goal from Joonas Donskoi and Coach Peter DeBoer made changes to his lines in the third period. Joel Ward tied the game during the third period giving Donskoi the opportunity to score at 12:18 in overtime. Before Conor Sheary’s goal in overtime, it was 30 years before a rookie made a game winning goal in the Finals.

For the Penguins, defenseman Den Lovejoy, who has 15 goals, scored in one of the Penguins goals in Game 3, and assisted with Hornqvist’s goal.

Previous Marlins and Rays on the Road
Next Women’s College World Series Auburn vs. Oklahoma Softball