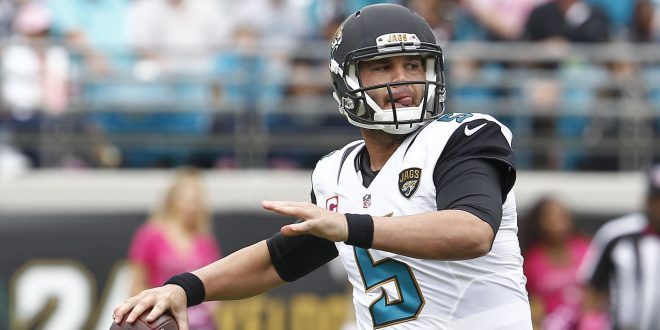 Bortles and Jaguars Preparing for 2016 season

The Jacksonville Jaguars went 5-11 during the 2015 regular season–a two game improvement over the previous year. The Jags look to take it a step further this season and make the playoffs for the first time since 2007. The roster is loaded with talent as the organization made several off season acquisitions through free agency and the draft. Still as it goes in today’s NFL, all the success depends on the quarterback (Unless your name is the Denver Broncos). Fortunately the Jags franchise quarterback Blake Bortles made tremendous strides in his development last season.

In the 2015 season Blake set the Jaguars single-season franchise records for passing touchdowns (35), passing yards, (4,428) and pass completions (355).  Blake looks to surpass these numbers with the help of his teammates.

Blake Bortles on the teams progress during OTAs.

Blake Bortles talks about the chemistry between him and Julius Thomas.

The Jaguars have surrounded Blake Bortles with a plethora of offensive weapons including pro bowlers Allen Robinson and Julius Thomas, all purpose running back TJ Yeldon and free agent Chris Ivory. The offense has the potential to be just as dangerous as last season. In addition, drafting former Gator Dante Fowler Jr. last year and Jalen Ramsey this year to help an already  improving defense under the guidance head coach Gus Bradley the Jaguars will look to be a force in the AFC South.

Jaguars | Arguably the biggest winner of this year's offseason.

Here's a glimpse of the new-look Jags. #OTAs
https://t.co/QIu16DdcJE

The Jaguars will finish up their second week of OTAs with a workout on Friday and will wrap up the off-season with a three-day mandatory mini-camp June 14-16.