Home / College Softball / Auburn vs Oklahoma: The Final Game of the WCWS 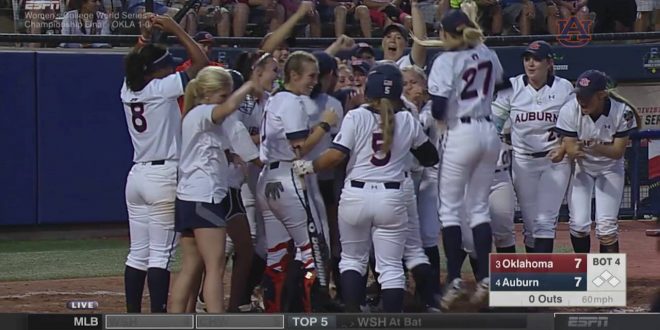 Auburn vs Oklahoma: The Final Game of the WCWS

Tonight a new national champion will be crowned at the Women’s College World Series. Game 3 will pit the Auburn Tigers and the Oklahoma Sooners against each other in Oklahoma City.

Auburn’s Tiffany Howard’s home run over the wall catch helped Auburn get the win Tuesday night. OU seemed like they were going to take a two-run lead in the sixth inning when Shay Knighten made a hit towards the left field stands, but then Howard leaped up and brought it back to get the tie for Auburn

Then, Auburn’s Emily Carsone’s walk-off grand slam in the bottom of the eighth inning forced a Game 3 with an 11-7 win over the Sooners. With Auburn’s 11 unanswered runs, they made the largest comeback in Women’s College World Series history with them trailing 7-0 at the top of the second inning.

"No matter what's going on…We're in it together."