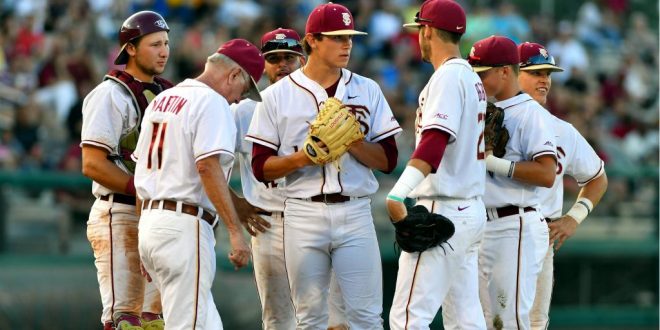 Big-time rivalries have fueled big time match ups since universities started competing against one another. Rivalries such as Ohio State-Michigan, Alabama-Auburn, and North Carolina-Duke have a history of heated exchanges and fierce fan bases.

In the State of Florida, nothing matters more than the Florida-Florida State rivalry. Regardless of the sport, each school strives to beat one another on and off the field. The rivalry will create a new chapter as the teams play this weekend in Gainesville in an NCAA Baseball Super Regional.

Florida State has struggled mightily versus the Gators this season. They have been outscored 17-4 and have lost all three match ups against the Gators this year. The Seminoles however have achieved significant milestones this season despite some disappointments. The win on June 5th gave FSU it’s 40th win on the season, giving the Seminoles a streak of 39 straight years reaching 40 wins.

Congrats to @FSUBaseball on Super Regional berth. Mike Martin has 39 str yrs of 40+ wins! Every season he has been head coach! Incredible!!

If anything, knowing that Florida was in their regional bracket has made the Seminoles more focused and prepared. During the Tallahassee Regional, the Seminoles averaged over 14 runs a game on their way to the Super Regional round. Assistant coach Mike Martin Jr emphasizes that the team has improved, but the only thing that matters is the next game. The pitching rotation has been set for the Seminoles as well as Martin Jr. said Cole Sands, Drew Carlton, and Tyler Holton will be the starting pitchers against Florida.

Only one of these teams will punch their ticket to Omaha and both are looking for their first national titles in Omaha. Last year, the Gators were able to beat the Seminoles in a Super Regional to advance to the College World Series.  This year, the Seminoles have struggled away from home, only going 7-9 in away games.  In addition, Florida State has had its issues defensively as they only field at a .968 clip.

ESPN Gainesville 95.3 FM and AM 850 WRUF will have live coverage of the Super Regional on Saturday at 5:50 pm.