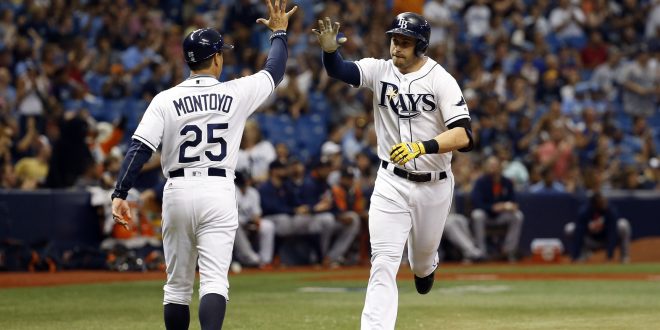 The Tampa Rays are riding high after Tuesday night’s 8-7 victory over the Seattle Mariners. When Mariners starter Taijuan Walker left during the fourth inning with an apparent achilles injury, the bullpen was tasked with holding on to a three-run lead. It was not to be as the Rays came firing back. The Tampa Bay Rays look to carry the momentum of this victory into Wednesday night’s matchup.

The Rays are playing their best baseball of the season, having won eight of there last 10 games. A major contributor to the Rays success has been veteran Evan Longoria. In the month of June, Longoria has posted solid numbers with a .349 batting average, seven Home Runs, 14 RBIS and a .417 on base percentage. One of those home runs came in Tuesday night’s game during the seventh inning when Longo hit a three-run shot to tie the game.  After starting the season off slow, these numbers have bumped his season total to a .279 BA 16 HRs and 40 RBIs . The 16 HRs ties Longoria with five other players for fifth in the AL in home runs.  He looks to continue his success tonight against Mariners starter Nathan Karns.

On the mound tonight for the Rays is left-hander Drew Smyly. This is Smyly’s first start since he was skipped in the rotation a week ago in order to receive a mental and physical break. Rays Managers Kevin Cash hopes the break has done his pitcher some good as Drew has allowed 17 earned runs overs his last three starts for a ERA of 4.94 on the season.  Smyly has only has two wins with seven losses.

Looking to spoil the Rays plans is third baseman Kyle Seager. Not unlike fellow third basemen Evan Longoria, Seager got off to a slow start this season. That’s not the case anymore as over the last month, Seager has been sporting a solid 327. batting average with an .419 on-base percentage. In addition, over the past month, Seager has hit five home runs and 23 RBIS.  Seager added to his home run total in Tuesday night’s contest with a two-run blast in the second inning that put Seattle up 2-0. Seager will look to produce similar numbers in Wednesday’s contest, but with victory in mind.

As mentioned earlier, toeing the rubber tonight for Seattle is right hander Nathan Karns. Karns will look to last longer then the 4 1/3 innings he pitched in his previous outing. On the season Nathan has five wins and two losses with a 4.09 era.