Home / College Basketball / Chasing The Beast of the East: The Kentucky Wildcats 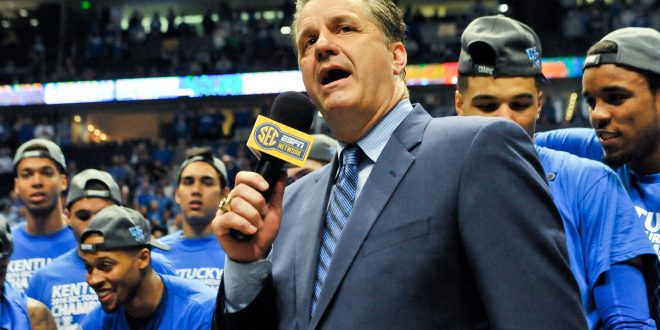 Chasing The Beast of the East: The Kentucky Wildcats

Dominance is the Kentucky Wildcats name and winning is there game. That has been the recent trend over the last few years as the bread winners of the SEC all have come out of the East—namely the Kentucky Wildcats. Last season John Calipari and the Wildcats went 29-7 overall with a 13-5 SEC conference record. The Wildcats just missed the Sweet 16  after losing to the Indiana Hoosier in the second round of the NCAA Basketball Tournament, 73-67.

John Calipari and the Wildcats as usual will have to adjust after losing three players to the NBA draft.  Freshman Jamal Murray was selected seventh overall by the Denver Nuggets in the first round, freshmen Skal Labissier and sophomore Tyler Ulis went to the Phoenix Suns at 28th and 34th overall picks respectively.

That's a wrap on #NBADraft2016. Another banner night. Three more picks pushes total to 28 in the last seven years. pic.twitter.com/WLOaHXS06Y

Mark Fox and the University of Georgia Bulldogs look to get back in the swing of things as well. The Bulldogs went 20-14 overall with 10-8 conference record. Coach Fox recently talked about there 3 recruited freshmen going forward.

The LSU Tigers look to make improvements this up coming season as well. The SEC member  had an overall record of 19-14 and a conference record of 11-7. Head coach Jonny Jones is very optimistic on this upcoming season and looks to his 5 juniors for leadership after losing star Forward Ben Simmons to the NBA draft.

The Arkansas Razorbacks finished the 2015-2016 season at 500. all around with a 16-16 overall record and a 9-9 conference record. The Razorbacks will look to finish above 500. next season and potentially make the NCAA tournament. Mike Anderson spoke on Senior Moses Kinsley improving his game.

The Tennessee Volunteers will look to improve upon there overall 15-19 record and 6-12 conference record from last season. Rick Barnes returns for his second season as the Volunteers head coach. Coach Barnes speaks  the Tennessee program being unstable the last few years and requiring some form of stability.

When compared to the carousel of the SEC west there hasn’t been many coaching changes in the east. The Vanderbilt Commodores however made a change. After 17 seasons the Commodores moved on from Kevin Stallings (who found a home in Pittsburg) and  ended up hiring Bryce Drew. Drew who is a 3 time Horizon League Coach of the Year winner spent 5 seasons at Valparaiso.

Bryce Drew states summer 2016  has been great for Vanderbilt.

As mentioned during the conference several times SEC Commissioner Greg Snakey named recently Mark Whitehead as the Coordinator of Men’s Basketball Officials for the Southeastern Conference and Dan Leibovitz  as the Associate Commissioner for Basketball. These changes are meant to improve the SEC as the conference looks to gain some respectability in the college basketball world outside of the Kentucky Wildcats.