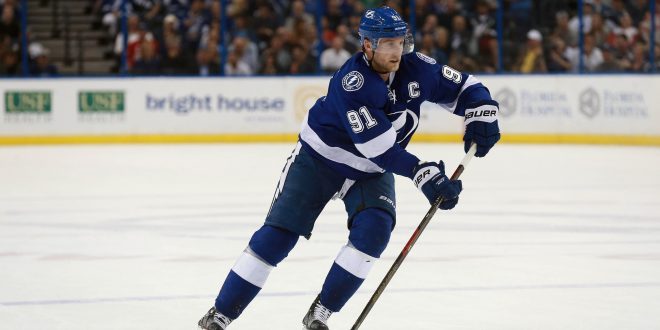 Rumors were spreading about the teams that were planning to pursue Tampa Bay Lightning center and captain Steven Stamkos. The Detroit Red Wings. The Boston Bruins. The Buffalo Sabres. The Vancouver Canucks. The Toronto Maple Leafs. With Stamkos set to become an unrestricted free agent on Friday, competition was going to be fierce for the former number one overall draft pick and two-time Maurice “Rocket” Richard Trophy (awarded to the NHL’s top goal scorer) winner.

But, in the end, none of that mattered. The Lightning resigned Stamkos Wednesday to an eight-year deal. Sources say the deal is worth $8.5 million annually.

Excited to be back for 8 more years @TBLightning ! Here we go …..

Bolts general manager Steve Yzerman said he was surprised the deal got done so quickly.

Yzerman: “At 26, a player is really entering the prime of their career… I think [Stamkos’] best years are ahead of him.”

Yzerman: “This contract works for us… Stamkos wants to be here, and it’s important for him to be here.”

The signing is a plus for a Bolts team that was just one game away from the Stanley Cup Final last season. Tampa Bay ultimately lost to the eventual Stanley Cup champions, the Pittsburgh Penguins, in Game 7 of the Eastern Conference Finals.

Junior telecommunication student at the University of Florida. Passionate about all things related to sports.
@@EllenBazley
Previous Chasing The Beast of the East: The Kentucky Wildcats
Next MLB Weekend Outlook

That is not something you get to say every day in hockey. The Tampa Bay …