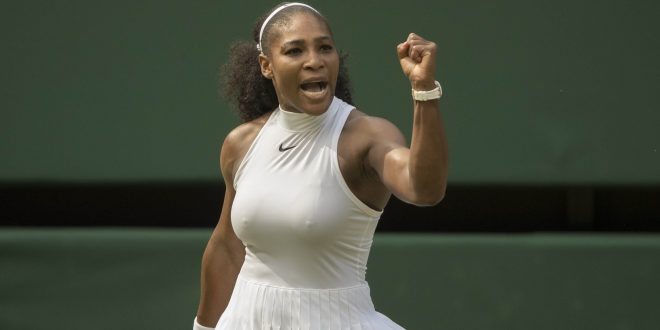 Quarterfinals play is in full swing as we head into the eighth day of play in Wimbledon 2016.

Sisters Venus and Serena Williams have locked up two of the four semifinals spots in this year’s women’s draw.

Venus, the five-time Wimbledon champion and oldest competitor in the women’s field, defeated Yarsoslava Shvedova 7-6, 6-2 Tuesday morning en route to a semifinals match against No. 4 Angelique Kerber. This is her first time advancing to the final four at Wimbledon since 2009.

However, it is no surprise that top-ranked Serena has advanced to the semi-finals. No. 21 seed Anastasia Pavlyuchenkova stood no chance as Serena demolished her in straight sets 6-4, 6-4. Serena, 34, became the oldest player to win a Grand Slam in the open era last year with her win at Wimbledon. She is on the brink of breaking her own record with her dominance throughout the tournament thus far. She will face unseeded Elena Vesnina in the semifinals.

American Sam Querrey has continued his unlikely run to the quarterfinals after defeating Nicolas Mahut 6-4, 7-6, 6-4 Monday afternoon. The 28-year-old California native shocked the world on Saturday as he defeated the No. 1 seed Novak Djokovic. Querrey is the first U.S. man to reach the quarterfinals at any Grand Slam event since John Isner and Andy Roddick did it at the 2011 US Open.

Querrey is extremely happy with his play. When asked about how he felt after his match, he mentioned that he felt focused in and that everything just clicked at the right time.

After defeating Steve Johnson in straight sets Monday, Roger Federer’s hopes of becoming the first person to win eight Wimbledon titles have gotten closer to becoming a reality. The 34-year-old has not won a major since Wimbledon in 2012, but has not let his spirits get down.

“I hope there is a bit more tennis,” Federer said. “I hope I can win Wimbledon one more time. That would be nice.”

Federer’s path to the championship is looking increasingly easier as his adversary, Novak Djokovic, was defeated by Sam Querrey earlier in the weekend. Djokovic has had Federer’s card in recent matches, beating him in three major finals since 2012. Federer is set to face Marin Cilic on Wednesday.

Previous Marlins Blow 6-Run Lead, Look for Improvement from Stanton Against Mets
Next Rays Look for Another Win Against Angels

The 2017 Australian Open: A grand slam event that feels like a lifetime ago. This …