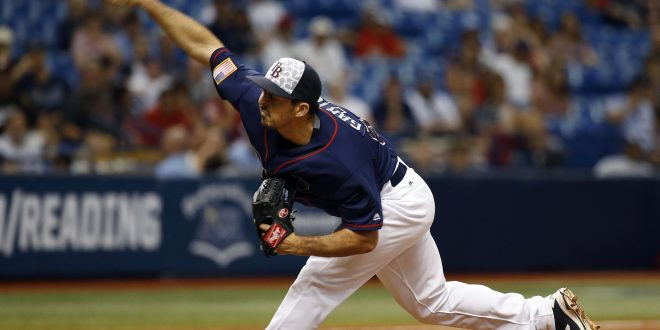 Rays Look for Another Win Against Angels

The Rays defeated the Angels 4-2 in game one on Monday night and earned their first win at home on July 4 since 2008. The Ray’s are coming off of only their third win in their past 19 games. While the Angels have now lost the last 12 of 14 games.

Logan Morrison, the Ray’s first baseman scored the final run off of an RBI double from Steven Souza. Morrison says he is glad they could finally close out with a win.

Matt More, started for the Rays on Monday night pitching 6 2/3  innings, now has three wins in his last five starts and 2.43 ERA.

Rays reliever, rookie right-hander Ryan Garton, took the mound for the first time on Monday night, got the final two outs and recorded his first career save. Garton says he is happy he was able to do his job and contribute to Monday nights win.

Tonight the Rays will start right-handed pitcher Jake Odorizzi who is 1-2 in his starts for the season has a 6.92 ERA, while the Angels will have righty Tim Lincecum on the mound. Lincecum is also 1-2 on the season and has a 6.75 ERA.

Tonight’s game is set for 7:10 p.m. at Tropicana Field in St. Petersburg, Florida.