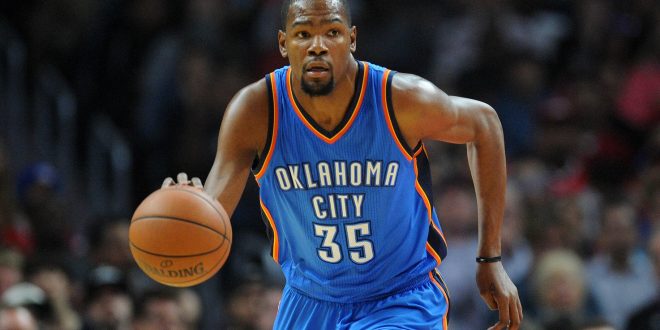 The biggest of whales in this year’s free agency period, Kevin Durant, has finally decided on where he is going to sign. Via the Players’ Tribune, the former league MVP has chosen the Golden State Warriors over Oklahoma City, Boston, Miami and others. Sources say he will sign a two-year, $54.3 million dollar deal with a player option after the first year.

Being that it was the Fourth of July, only one team would light up fireworks with Durant’s decision. At the beginning of the weekend, reports surfaced that Durant would have to be absolutely blown away to leave Oklahoma City to join another team. Clearly, it was the Golden State Warriors who had the loudest of fireworks. Oddly enough, the Durant-lead Thunder were up 3-1 over the Warriors in the Western Conference Finals before collapsing for three straight games. The best regular season team in NBA history just got a major upgrade.

With the addition of KD, the Warriors easily have the best starting five in the NBA today and arguably in history. He will be in the mix with the two-time MVP Stephen Curry, his splash brother Klay Thompson, and triple-double machine Draymond Green. Those four are all 28 or younger and are considered to be top 15 players in the league. This is the same Golden State team that was 48 minutes away from capping off the greatest season ever and they got a four-time scoring champ to add to that mix. Expectations are incredible.

Now, with Durant leaving, what about the future of the Oklahoma City Thunder?  They decided to let Durant test the market and it backfired on them because they could have traded him last year for a big haul in return.  The same issue confronts them now with Russell Westbrook, who will be an unrestricted free agent next year with the Lakers, Heat, and others looking to land him. Will the Thunder try to re-sign him long-term this off-season, trade him before next year’s deadline, or let him test the waters as well? We’ll have to wait and see. For now, GM Sam Presti says the front office will stick to the core values that got them to where they are now.

Without a doubt, the pressure on Golden State to win is at an all-time high. It could be said that the 2016-2017 NBA season will be the first in practically a decade that all the pressure to win a championship won’t be on LeBron James.

The playoffs are beginning to look dicey for the injury riddled Brooklyn Nets. KD Down …