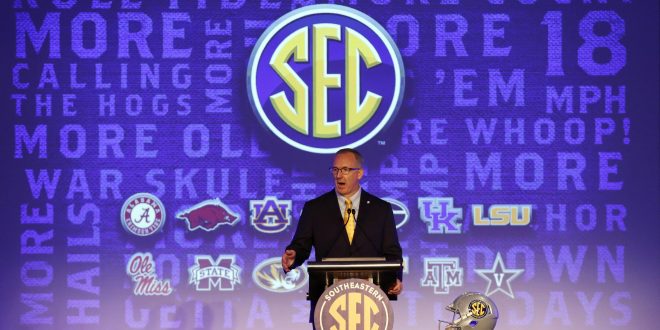 According to Sankey, the conference’s 14 universities provide their student athletes with opportunities for success both on and off the field. College football’s most successful conference is simply expected to produce greatness, and Sankey says high expectations are placed on each and every student athlete.

Looking forward to the upcoming football season, plenty of questions remain for the coaches who took the podium today. For head coach Gus Malzahn, Auburn’s disappointing 7-6 finish may have fans wondering if he can make the changes necessary to poise the team for success.

Along with the conference’s ninth ranked offense (370.0 YPG), Malzahn must address four players who were arrested on misdemeanor charges of marijuana possession in April. For second year Florida head coach Jim McElwain, high expectations are familiar to say the least. The Gators got back on track last season with a 10-4 record and an SEC East title, despite losing starting QB Will Grier to suspension. Prior to Grier’s NCAA suspension, the Gators looked like a legitimate national contender at 6-0.

Vanderbilt is also in an upward climb, and last season’s 4-8 record leaves plenty of room for improvement. After all, head coach Derek Mason is entering the 2016 season with the SEC’s second-lowest scoring offense. However, production should pick up for the Commodores as sophomore Kyle Shurmur gets acclimated under center; last season, Shurmur started 6 games at QB – finishing with a record of 2-4.

SEC Media Days will continue through Thursday this week.