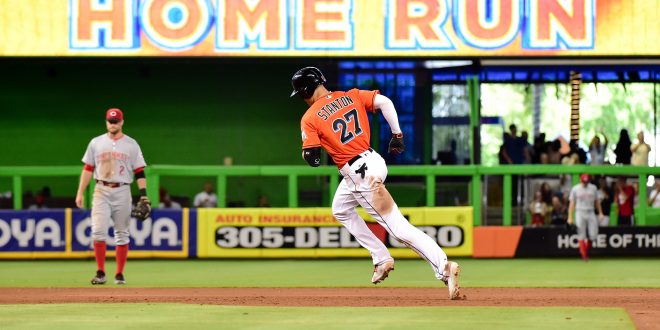 Marlins and Braves Heat Up, Rays Continue to Still Struggle

The Miami Marlins (47-41) are starting to heat up going into the MLB All-Star break.

The Marlins completed a home sweep Sunday night when they destroyed the Cincinnati Reds 7-3 with help from Giancarlo Stanton. Stanton hit his 20th home run to give the Marlins the lead for good, 4-3 in the fifth.

Stanton was not selected to play on the All-Star team but will participate in the Home Run Derby Monday night. You can listen to the Derby live on ESPN Gainesville 95.3 FM.

The Marlins will take the field again when they head to Saint Louis to take on the Cardinals July 15.

The Atlanta Braves (31-58) denied the Chicago White Sox (45-43) their sixth straight series win after dropping two of three against the Braves.

The Braves clinched a 2-0 win against the White Sox on Sunday night with Braves starting pitcher Mike Foltynewicz (3-3), having a career-high 10 strikeouts and no walks.

Braves first baseman Jeff Francouer says they are getting hot right before the All-Star break but says they are looking forward to their time off.

Atlanta will decide Friday’s starter after the All-Star Game on Tuesday. RHP Julio Teheran (3-8)  was selected as a member of the All-Star team, will likely start on Friday if he does not pitch on Tuesday.

Up next the Braves will take on the Colorado Rockies at home on July 15.

Tampa Bay has now lost six straight games and 22 of their last 25 games.

Rays manager Kevin Cash Says the Rays have to find a way to turn things around in the second half.

The Rays will be back in play when they host the Boston Orioles on July 15.