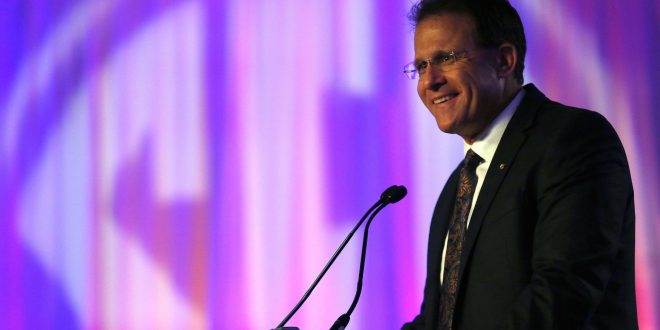 The SEC Football Media Days has begun and the first coach that spoke today was Gus Malzahn with the Auburn Tigers. The team is still not certain who will be the starting quarterback, but one thing that was announced is that the offense will be looking new this upcoming season.

Running for the starting position are newcomer John Franklin III and returning starers Jeremy Johnson and Sean White. Malzahn speaks on what his mind is on for the quarterback position.

The Tigers are set to open the season against Clemson at home. As well as playing one of the toughest schedule in college football according to Malzahn.

A key player that will be returning for the Tigers this season will be Carl Lawson who missed out the 2014 season after suffering a hip injury in last season’s opening game against Louisville and missed six games. Although Lawson has had an injury-riddled career  he has appreciated every moment of it.

Home? Away? 'I want to win them all,' says Auburn's Carl Lawson at SEC Media Days. Video: pic.twitter.com/r2nowhvAuC

Also representing the Tigers for media day were wide receiver Marcus Davis and Montravius Adams who are both star players for the team.

For now the team will look forward to the upcoming season and seeing what they can do on defense.