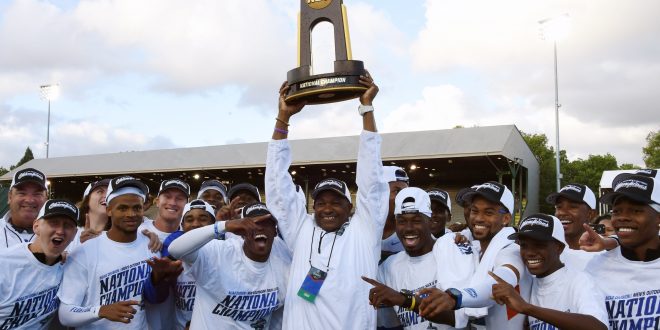 The 2016 Track and Field Olympic Trials are complete which means the Rio Olympic games are just around the corner.  At the event several Gators (current and alumni) qualified for  the Olympics in Rio. Florida Gators Track and Field Head Coach Mike Holloway was in attendance for the trails.

Attending the Olympic trails and seeing many of his athletes was a special feeling for Coach Holloway. Holloway speaks on the feeling of seeing current Gators and Gator Alums at the Olympic trials.

Coach Holloway has seen  many of his athletes represent the red white and blue over the years. Holloway has been apart of the Olympics as well, serving on the Olympic Team staff in 2012. Holloway comments on this honor.

"There's not many meets more exciting than the Olympic Trials."–@HeadGatorTRK #GoGators pic.twitter.com/TG3kYfbhPA

Gator Greats Arman Hall, Tony McQuay and Novlene Williams-Mills qualified and will be heading to the Rio Olympics. A total of 13 athletes from Florida’s track and field contingent of Olympians are to compete in Brazil come August.

In the finals of the 400m at the United States Olympic Trials last week, Hall (45.09) and McQuay (45.30) finished fourth and fifth, respectively, to be considered for relay-pool honors.

Congrats to @tmq400 on his selection to the @TeamUSA 4×400 Relay pool! #RioBound #GoGators pic.twitter.com/MsvFLbmlEt

Congratulations to @Arman_Hall for earning a spot in the @TeamUSA 4×400 Relay pool! #RioBound #GoGators pic.twitter.com/Yw7nyoz7pY

And congrats to Novlene Williams-Mills for making her FOURTH Olympics team with Jamaica's 4×400 relay! #GatorsAlways pic.twitter.com/ssqlZav3bd

A survivor of breast cancer, this will mark Williams-Mills fourth appearance in the Olympic Games this year. Williams-Mills won her 400m prelims heat (52.51) at the Jamaica National Senior Championships last week, finished second in the semifinal (50.89) and made fourth overall in the final (50.64) in order to participate in Jamaica’s women’s 4×4 relay pool.

Coach Holloway speaks on what he believes to be the stronger events for the USA Track and Field Team.

The Olympic Track and Field events are scheduled to start on August 12th in Rio. Let the games begin.