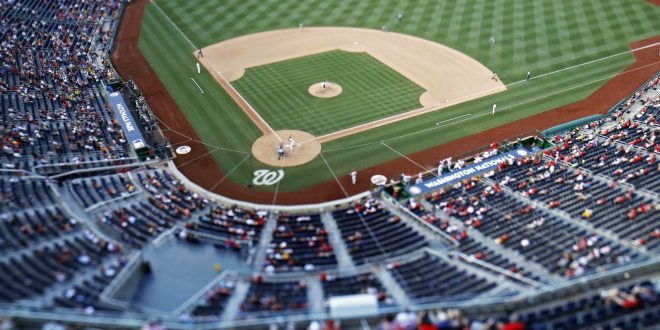 Jul 17, 2016; Washington, DC, USA; A general view of the game between the Washington Nationals and the Pittsburgh Pirates in the fourteenth inning at Nationals Park. The Pirates won 2-1 in eighteen innings. Mandatory Credit: Geoff Burke-USA TODAY Sports

Tonight is appropriately “Dusty Baker Bobblehead Day” at Nationals Park as the Los Angeles Dodgers will play the Washington Nationals. Baker, the Nationals’ manager played for the Dodgers during his MLB career and won a championship with them in 1981.

This is the first of a three-game series, with Scott Kazmir starting for the Dodgers and Reynaldo Lopez makes his MLB debut for the Nationals. Reynaldo, who pitched in the MLB Futures game. The Nationals promoted Lopez, putting right hand pitcher Joe Ross on the disabled list with a right shoulder inflammation

Jose Urena will start for the Marlins, up against Vince Velasquez for the Phillies. The Phillies will try for an improved performance at bat, as they struck out 14 times against Marlins All-Star pitcher Jose Fernandez, 16 times in total.

The Mets have the second game of their series against the Cubs, just one game behind the Marlins in the NL East. After losing the first game 5-1 to the Cubs, manager Terry Collins wants to see more from the Mets’ offense.

Both pitchers are looking for improvement in their first starts of the second half. Noah Syndergaard will be starting for the Mets and Jake Arrietta will be starting for the Cubs. After struggling in his last three starts of the fist half of the season, manager Joe Maddon rested him off of the All-Star break. For the Cubs, Syndergaaard who boasts one of the highest average fastball velocities of starting MLB pitchers(98.1 mph) experienced speeds as low as 91 mph in the last innings he played in the first half.

After being swept in San Diego by the Padres the Giants will next travel to Boston for a two-game series against David Ortiz and the Red Sox. This series will be only the second trip to Fenway Park since interleague play began in 1997. Veteran pitcher Jake Peavy will start on the mound for Giants against Rick Porcello for the Red Sox. The Red Sox are coming off of a series win but a third game loss against their rivals the New York Yankees.

#SFGIANTS BASEBALL IS BACK! pic.twitter.com/lVYBcMH1yu

The Braves are looking to bounce back from an 8-2 loss against the Reds in game two of the series. The Braves will give rookie righty Tyrell Jenkins his second career start. Similarly, the Reds will send rookie lefty Cody Reed to the mound, who started the season as the second-best organizational prospect, but has 23 earned runs allowed so far in 24 2/3 innings.

Sound Courtesy of Westwood One