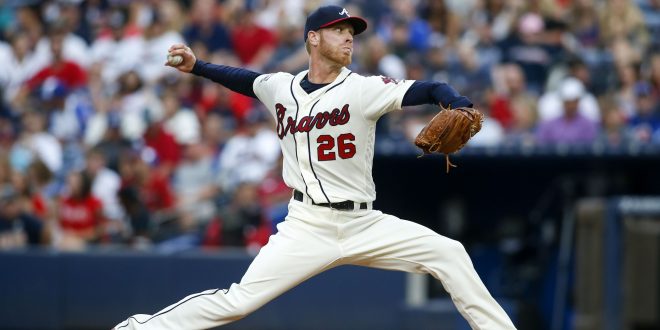 The Atlanta Braves (33-62) open up a four-game road series with the Rockies (43-51) tonight at Coors Field. The Braves are coming off of yesterday’s 6-3 loss in Cincinnati, while Colorado fell 11-3 to the visiting Rays.

The Braves will look for more consistent pitching in this series, as starter Lucas Harrell gave up a four-run sixth inning to the Reds. Atlanta was leading Cincinnati 2-0 before Jose Peraza hit a two-RBI single. Tucker Barnhart then stepped up to bat, nailing a homer to score Peraza and open up a 4-2 lead.

In the clubs’ last matchup, the Rockies won 4-3 as Chad Bettis got the quality start, allowing only three earned runs in 6 2/3 innings. Bettis will be back on the mound tonight, while the Braves will start Mike Foltynewicz.

Foltynewicz has been pitching well after returning from a 30-day stint with elbow soreness. Since resting the injury, Foltynewicz has a 3.97 ERA through four starts.

Meanwhile, Colorado’s Charlie Blackmon leads the MLB with a twelve game hitting streak and he’s also gotten on base in 25 of the past 26 games.

First pitch between the Rockies and Braves is set for 8:40 PM.

I'm a senior studying Political Science at the University of Florida. Multimedia Sports Reporter for ESPN Gainesville 95.3 and WUFT - Passionate about life, sports, and fitness.
@charliejordanuf
Previous Marlins To Close Out Series With The Phillies
Next MLB Preview Tonight