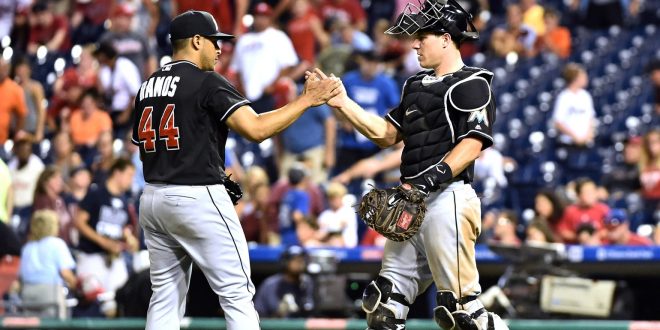 The Miami Marlins are in the middle of a crucial ten game span against NL East foes. Tonight, Miami will finish their four games series with the Philadelphia Phillies before facing the New York Mets at home on Friday. Following the series with the Mets, the Marlins get face the Phillies again in Miami.

The Marlins have a 4-2 record since the All-Star break. In their current series with the Phillies, they are leading 2-1. Miami won the first two games in extra-innings with a 3-2 score in the 11th inning on Monday and a 2-1 score in the 10th inning on Tuesday. Last night, Philadelphia got the better of Miami in a 4-1 game. Jeremy Hellickson had an incredible outing pitching eight full innings, allowing only one earned run, and eight strikeouts for the Phillies.

Can’t get to Hellickson in game three. RECAP: https://t.co/S9q7L9UXYl pic.twitter.com/ZWXY6Zzl4s

Marlins manager Don Mattingly says that a pitcher like Hellickson has been giving the offense problems this year. Despite grabbing two wins so far in this series, the Marlins have slowed down offensively. Superstar slugger Giancarlo Stanton highlights the team’s struggles by only going 1-12 in the last three games. Mattingly emphasized the concerns the team has offensively.

The series finale will have Tom Koehler (6-8, 4.69 ERA) pitching for the Marlins while Jerad Eickhoff (6-10, 3.76 ERA) will take the mound for the Phillies. Koehler has a 0-1 record and sporting a 1.93 ERA all-time against the Phillies. Outside of a bad outing on July 9th against the Colorado Rockies, Eickhoff has been stellar in his last five starts. Eickhoff has gave up no more than two earned runs in four of his last five outings. Just like the first three games so far, the game tonight looks to be another pitching duel. A Marlins win tonight will create a nine game separation between themselves and the Phillies, and bring them one game closer to the NL East-leading Washington Nationals (currently 5.5 games back).

First pitch is schedule to take place at 7:05 p.m.